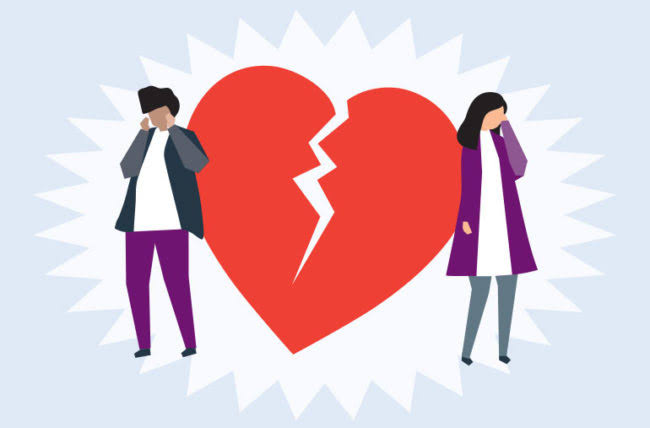 This picture has nothing to do with this post, it is only used to illustrate the story. [CREDIT: Cleveland Clinic Health Essentials]
The slang “breakfast” isn’t new to many Nigerians, especially those on Twitter.
Breakfast is the first meal of the day eaten after waking from the night’s sleep, but this definition doesn’t apply in the context of a romantic relationship.
Breakfast is often described as a sad and emotional moment in a relationship when a man or woman suddenly breaks up with their partner.
There are two forms in which breakfast can occur: the “known” and the “unknown.” The ‘‘known’’ is when your boyfriend goes straight to the point and breaks up with you face-to-face or via text messages.
While the ‘’unknown’’ is when he suddenly ends the relationship, and you have zero ideas that you have been dumped. Simply put, it’s a one-sided break-up.
Getting dumped by your significant other is, without a doubt, not a pleasant experience, especially when you have never had a proper discussion about going your separate ways.
To save you from the delusion of thinking your relationship still exists, here are seven ways to tell that you have been dumped.
What is a relationship without communication? If your boyfriend fails to pick up your calls or answer text messages for several days or weeks, there is a huge chance that he is ghosting you.
Rather than directly telling their girlfriends that the relationship is over, some men prefer to take the cowardly route of ghosting them. So, they either block their contacts or leave messages unread.
It has become the norm for people in a relationship to get to know their partners’ friends and family members. It often leads to a sort of bond between both parties. However, when a relationship faces issues, it’s evident that the friendship created will be negatively affected.
If you notice his friends have stopped communicating or cancelled hangout plans, there is a high probability they have been informed of the one-sided breakup and asked to stay away from you.

He is done with the relationship if he posts quotes like “Single all the way” or “Don’t need a woman to survive” on his Whatsapp status or Instagram stories. He would probably do this to subtly communicate that he is back on the streets and wants nothing to do with you.
Also, there are memes. If your boyfriend is the type of guy who posts memes about breakups or being single, you had better confront him to know if your relationship is a joke.
Time to grab your phone and visit your partner’s social media profile. If his relationship status has transformed from “in a relationship” to “single,” I’m sorry to inform you that your relationship has been declared obsolete, and the entire world knows except you.
The first rule of breaking up with someone is to delete their pictures from your social media pages.
Changing one’s relationship status is not the only digital flag to look out for. Also, scroll through his posts to search for any images of you. If you notice that the pictures you were featured in have been deleted from his feed, it shows he is creating a new slate for his next girlfriend.
A gift is a way a man expresses his love for a woman. There is bound to be at least one gift you receive from your boyfriend during your relationship. If he suddenly asks for it one day, providing an excuse, there is a chance he wants his “investment” back before completely ghosting you.

Also, if he moves his belongings from your home, be wary; he could be moving in with another woman.
Before you dismiss that friend who told you they saw your boyfriend displaying PDA with another lady, kindly consider the thought of your relationship being over.
The truth is that no one wants to face the reality of someone they care about leaving them, but if you hear from multiple sources that your man has publicly expressed romantic gestures to another woman, accept that you have been dumped.
Nothing else other than to move on. Better guys who deserve to be with a gorgeous and strong woman like you would find you someday soon.

Enter your email address and receive notifications of news by email.
Join 1,841,300 other subscribers.