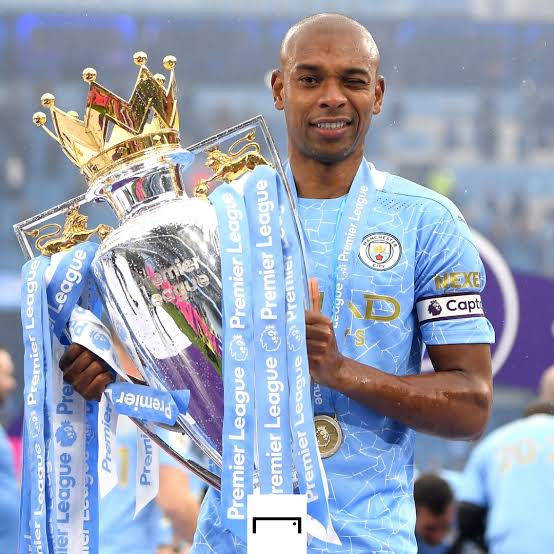 The veteran midfielder will hope to seal a fifth Premier League winners’ medal on Sunday having been long been renowned for his leadership qualities
If everything goes to plan then Fernandinho’s last act as a Manchester City player will be to lift the Premier League trophy one final time.
It will not simply be a farewell gesture or a response to his commitment and popularity after nine years at the Etihad Stadium.
It will be a testament to his role as club captain; chosen by his team-mates for his leadership qualities and inspiration in the dressing room.
Pep Guardiola has no say in the appointment of the skipper, although he was more than happy that the Brazilian took over from Vincent Kompany following his departure in 2019.
He knows he can turn to the 37-year-old when he needs him.
Fernandinho, and some of his team-mates, may well feel he could have been relied upon even more during this campaign, which is why he ultimately took the decision to leave at the end of the season.
Guardiola was shocked when it was revealed to him at a press conference ahead of the Champions League quarter-final with Atletico Madrid that Fernandinho would be leaving.
The midfielder had confirmed it minutes earlier, taking the decision out of the club’s hands.
“The role he plays this season, I like the people who behave behind the scenes. I know what he has done, behind me, he handles many of our players and stars for the benefit of the team,” Guardiola said immediately after the revelation.
“I praised him and he was here when I arrived. Raheem [Sterling], Kevin [De Bruyne], John [Stones], a few players, we know him well, from day one to now always here.
“An incredible player for Man City. There are things nobody knows but I know exactly.”
Fernandinho has always done things on his own terms and it has been that way since before he joined the club.
Back in 2013 when he finally arrived, talks between City and Shakhtar Donetsk were in danger of stalling but to ensure the deal went through Fernandinho forewent the £4 million ($5m) he was owed by the Ukrainian club.
It was a brave decision but he will walk away from the stadium for the last time as a club legend – with the possibility of a fifth Premier League winners’ medal that only Sergio Aguero can match.
“I’m really proud to have been part of this huge club, full of nice people, hard workers, and that’s why City are considered one of the best teams in Europe now,” Fernandinho told Arab News.
“I’m really proud to have been part of this team, to have been part of how they have grown and the history we have made. It’s a mix of emotions now. When I look back, the first time I arrived here so full of expectation; I just came to play well, to win titles.
“When the years went by, you become a bit more experienced and you win one title and you become hungrier and hungrier to win more.”
It’s now 17 years since he left Brazil and his two European-born children have never lived there. It’s a big decision to move back to his homeland with former club Athletico Paranaense expected to sign him.
For all his heroics in Manchester, Fernandinho still has to convince Brazilians of his qualities. He was part of the Selecao side humiliated 7-1 by Germany at the 2014 World Cup and took a large part of the blame.
Ironically, Fernandinho has done so much to improve the image of his countrymen in England and leaves as arguably the greatest Brazilian in Premier League history.
Previously at City, they had gambled on Jo, Robinho and Elano with mixed results. After Fernandinho came the hard work and quality of Gabriel Jesus and Ederson, all helped to acclimatise by the father figure whether out on the training pitch or buying home comforts from a small Brazilian store on the outskirts of Salford.
“It’s hard to leave City but it’s life. I have a wish to keep playing a little bit more, to get more minutes in games and the chance to play for another club,” he added.
“But it’s not just about football, you know, it’s about family, to be a bit closer to my family and friends. I have been away from Brazil for 17 years now and it’s not been easy.
“My dad is getting old, my mum is getting old and they can’t travel a lot to come and visit me, so the best choice is to go back home and stay close to them, and keep working there.”
The one regret is that Fernandinho will be the latest in a list of club legends – including Aguero, David Silva and Kompany – who leave without securing Champions League success.
It was noticeable that after the shock elimination againstt Real Madrid that he was one of the first players that Guardiola consoled at the full-time whistle.
So often the player to lift those around him, his one last shot at European success was gone and the pain was clear.
“I do believe in the future they will win the Champions League and I hope they can win it really, really soon,” he said. “I will be far away but supporting them — and always looking on at them to do well.”
But a fifth Premier League medal would be a pretty good way to sign off and if anyone ensures that City won’t be taking the final hurdle of Aston Villa lightly, it will be Fernandinho.
GOAL takes a look at the biggest transfer news and rumours from the Premier League, La Liga, Serie A and around the world
The 36-year-old club captain was injured in the chaos following the match
The Reds won 2-1 at Southampton, meaning Gerrard and Aston Villa now need to do them a favour against Man City if they are to top the Premier League