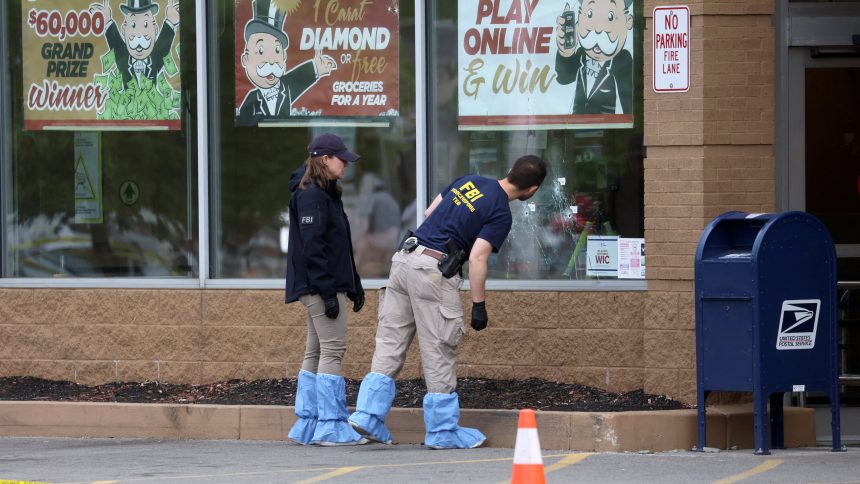 Advertisement
Jonah E. Bromwich, Matthew Haag, Michael Levenson and Kellen Browning
For months before the mass shooting in Buffalo that killed 10 people, a teenager mulled potential targets, posted racist and antisemitic memes and messages and updated his plans.
He considered targeting a predominantly Black elementary school in Buffalo, but decided it would be too difficult to enter. He mulled traveling to Rochester for an attack, or even to Maryland, but admitted of the second target, “I don’t have a plan for that.”
In the days before the attack, he posted pictures of himself and of a gun, on which he’d written in Wite-Out the names of other mass shooters.
The messages appear to have been posted on the chat application Discord by a writer who identified himself as Payton Gendron, before they were uploaded to internet forums as a pair of comprehensive documents.
Commencing in November and ending shortly before the attack, they lay out in excruciating detail the racist and violent ideology that drove the young man who now stands accused of the massacre at a grocery store in Buffalo, which he targeted because it was in a predominantly Black area.
They also suggest that there was ample warning of his plans, had investigators known where to look.
The transcripts contain pictures of Mr. Gendron, and the posts came from a handle that he used on several social platforms, though Discord, which declined to comment, has not confirmed that he sent them.
It is unclear whether the chats, which appear to have been posted on a private server within Discord, were shared with others in real time or assembled for a future audience.
But they indicate that the writer expected to eventually reach a like-minded community. He even requests that others continue to update the compendium with additional posts.
He also anticipated an investigation, making reference to F.B.I. agents searching his room.
The Buffalo police commissioner, Joseph A. Gramaglia, declined to comment on the Discord logs at a news conference Monday. He said that investigators were poring through “a lot of social media” and working to verify whether accounts belonged to the suspect.
“Every digital footprint is being looked at,” he said. “Some of that takes warrants that have to be served on various social media platforms.”
The logs, which were reported on by The Washington Post, offer a detailed rundown of months spent gathering gear, several trips to a gun store to inspect the assault rifle that the writer said he ultimately purchased, and even a visit to the Tops grocery store to map out the planned assault in March.
A few posts include crude drawings of the grocery store’s layout, including a possible route to follow during the shooting.
Scattered among the messages were musings about daily life, logging what the writer had eaten that day, fluctuations in his weight and his interactions with people.
He describes conversations with people at a flea market and at stores where he sold silver items, writing that he told them he needed money for college.
He wrote that he chased down a cat who attacked his own cat, Paige, in his garage and stabbed it repeatedly with a knife. He eventually decapitated it with a hatchet, he said, and buried it in the backyard, but not before taking a picture.
About two months before the shooting, on March 9, Mr. Gendron described having driven to Buffalo and gone inside Tops to plan the attack. He said he had noted where he planned to “gear up” and park and had made a map of the inside of the store, tallying the number of white and Black customers he saw there.
At about 4 p.m., as he was leaving Tops, an armed security guard confronted him, he wrote.
“I’ve seen you go in and out,” he wrote that the security guard said. “What are you doing?”
He responded that he was “collecting consensus data,” and the guard told him to speak to a manager. He wrote that he asked for the guard’s name and then said “bye and thanks,” before walking back to his car.
“In hindsight that was a close call,” he wrote.
Discord is a messaging application popular with gamers that gained mainstream appeal during the height of the pandemic, as young people trapped at home downloaded it to message and hold audio calls with others.
Its layout is similar to the workplace tool Slack, in that it is split into a series of chat rooms known as servers. Some are large and public, with thousands of members, while others are private and invitation-only, with rules and content moderation decisions left largely up to the whims of the server’s creator.
Discord has taken steps to improve its content moderation in recent years, especially after white supremacists used the site to plan the “Unite the Right” rally in Charlottesville, Va., in 2017. But it still relies heavily on user reports of misconduct.
Troy Closson, Jennie Coughlin and John Herrman contributed reporting.
Advertisement