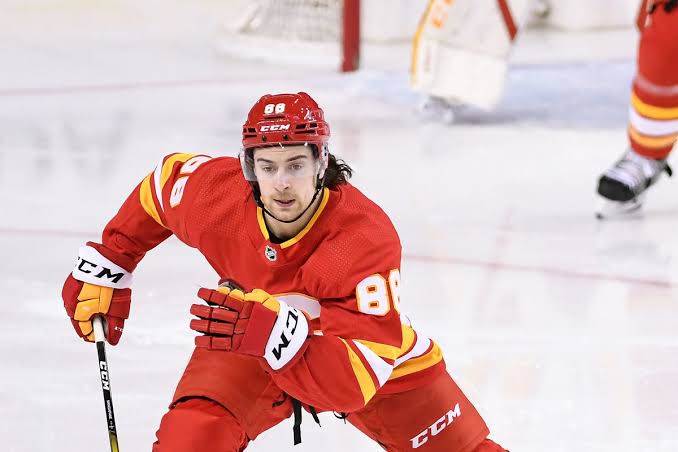 With career-high numbers in the books for Andrew Mangiapane, he’s looking to make this postseason with the Calgary Flames just as memorable.
Andrew Mangiapane has always heeded his parents’ advice when it comes to life – Stanley Cup Playoffs included.
In the days leading up to the Flames’ first-round postseason series against the Dallas Stars, Mangiapane, coming off his best offensive NHL season to date, spoke with a number of family and friends, each one of them eager to wish him and his teammates well.
Peter and Patricia Mangiapane had a few extra words of encouragement for their son.
“They told me to go out there, play hard and give my best,” the 26-year-old forward told NHLPA.com. “Everyone back home is wishing me luck. They are all pumped. My mom and dad and my sisters are all excited. I think they’re more nervous than I am. For me, I’m just going to take it game to game.”
After a regular season in which he established several personal-best offensive numbers, including goals (35), assists (20), points (55) and game-winning goals (8), the Ontario native will look to elevate his game as the Flames look to lay claim to their second Stanley Cup, 33 years after the club’s first championship.
Mangiapane, who has 15 NHL playoff games to his name, is looking forward to the challenge of pursuing hockey’s most cherished team trophy.
“You just prepare for this time of the year as you would any other game, and not look any further ahead than the next game. Everyone’s emotions are high at this point of the year. It almost feels like you’re playing that first pre-season game, where everyone has put in that hard work and now you get to go out there and play.”
For Mangiapane, it means making smart decisions every time he sees the ice.
“I think the biggest thing for me is puck management and knowing when to take an extra risk or getting the puck in deep. It’s about making the right play and doing the right things, knowing when to come off for a change, things like that. Mistakes happen. In the playoffs, they get magnified. If you make a mistake, it could be in the back of your net. Every team is here for a reason.”
The 166th overall pick of the Flames at the 2015 NHL Draft won’t be gripping his stick tighter or acting indecisively when he does take a shift.
Mangiapane’s mindset is all about positive energy.
“The biggest thing is going out there and playing with confidence. You just have to go out there, play your game, and trust in your teammates. It’s a long season, everyone has played hard and for the teams that have made it to the playoffs, every player on those teams has earned it. You’re in the dance, you’re excited and you want to be the team that wins it.”
When Calgary isn’t playing, Mangiapane’s connection to the Stanley Cup Playoffs is still strong.
Typically, you’ll find him in front of the television on an off night, taking in whatever games happen to be on.
His viewing habits are a mix of curiosity and homework.
“I like to stay involved and see what’s going on. Who knows? It could be your next opponent. I like to watch the games. I find them entertaining and I like to see the other guys in the league, to see who is playing well, who is scoring – it’s really entertaining for me.”
On certain occasions, Mangiapane will take a break, albeit briefly, from the playoff pressures, to mentally unwind from it all.
“You’re always preparing for the next game. Resting those bumps and bruises, taking a nap, here and there. For me, my girlfriend and I will go out for dinner, which gives you that time to take your mind off the game for a little bit.”
And when talk does to turn back to the game, he knows who to look to for support.
Inspiration is always a phone call away.
“My parents have been there for me from day one. Obviously, they’re very excited for me and the guys. They always have something very positive to say, which really does mean a lot to me.”
Perhaps Mangiapane could give them a few ideas as to what they could say the next time they speak.
“If they tell me to score, you’ve got to score, right? Win the game, score a goal, play well.”

Dion Phaneuf has announced his retirement from the NHL after 14 seasons.
Kevin Hodgson is a Willie O’Ree Community Hero Award finalist, but the executive director of HEROS isn’t about the accolades.
A lesson in odds didn’t deter Milan Lucic from reaching his goal, but helped push him further towards achieving an impressive NHL milestone.
Mikael Backlund is honouring the memory of his beloved dog, Lily, while helping families and pets stay together in their time of need.
Boston native Noah Hanifin reveals his Beantown favourites, his latest must-read and more in After the Buzzer.
From rollerblades to NHL rinks, it’s all brotherly love between Brady and Matthew Tkachuk ahead of their four-game series unique to the 2020-21 NHL season.