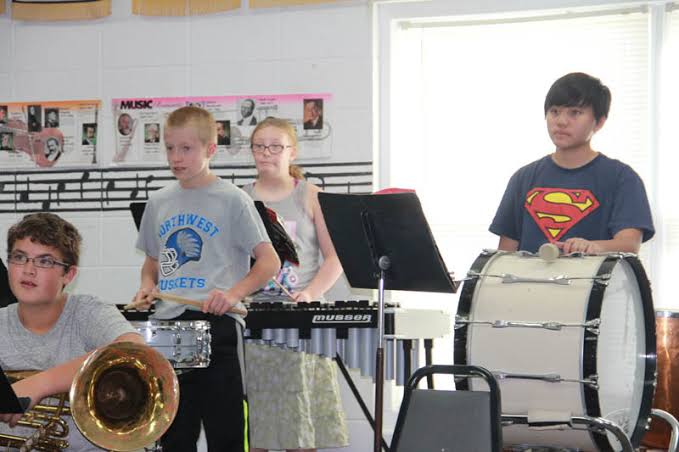 West Nodaway and North Nodaway school districts have joined forces to provide music instruction for students.
The districts have hired Jonathan Webber for instrumental direction and Joni Voss for vocal instruction.
“I believe this has been a great addition to both school districts,” Shannon Nolte, WN superintendent, said. “On behalf of our district, I am extremely pleased to have two people that can share their music passions and strengths with our students. The strengths that each have are not as overwhelmed with the task of teaching it all to every level.”
“I enjoy playing my instrument. I don’t know what else I’d be doing besides band,” Keagan O’Riley, NN sophomore, said.
Webber recently took the combined North-West Nodaway band to Clarinda, IA, for a band competition and the band will play in the Northwest Homecoming parade. Webber is taking four student volunteers to the 275 Conference Band event on November 7. He plans to hold a summer band camp to familiarize students with playing together and is looking for more opportunities to showcase the combined band.
“I’m working hard to get the students up to where they need to be,” Webber said.
“This scenario allows our teachers to grow in their learning and students can directly benefit from this growth. We look forward to the vocal concerts that Mrs. Voss will bring to our schools and are happy to see our students march in band again with the formation of the North-West Nodaway Musket Pride Band by Mr. Webber,” Nolte said.
NN Superintendent James Simmelink said he agrees with Nolte’s evaluation. “Next year, we’re looking forward to a better opportunity to schedule music for the students because (the hiring of the two music teachers) happened later in the year when the schedules were set. We’ll be able to build the schedules with sharing in mind,” he said.
The WN portion of the band has 12 members while the NN band provides 17 students for the combined ensemble.
Emily Dew, NN sophomore, said, “I enjoy hanging out with the people in band and enjoy playing my instrument.”
The NN band will perform individually on Thursday, December 1 during the Night of the Arts event. West Nodaway’s winter concert is Wednesday, December 7.
“I enjoy it and have done it for a number of years. It would be weird not to be in band,” Ashley Thompson, NN sophomore, said.