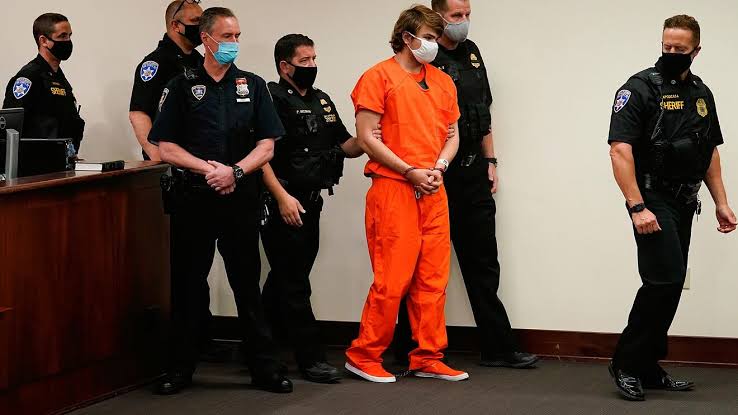 Bored during the early days of the pandemic, Payton Gendron logged on to the 4chan message board website to browse ironic memes and infographics that spread the idea that the white race is going extinct.
He was soon lurking on the web’s even more sinister fringes, scrolling through extremist and neo-Nazi sites that peddled conspiracy theories and anti-Black racism. It wasn’t until he spotted a GIF of a man shooting a shotgun through a dark hallway, and then tracked down a livestream of the 2019 killing of 51 people at two mosques in New Zealand, that Gendron appeared to have found his calling: as a virulently racist, copycat mass shooter with a craving for notoriety.
The white 18-year-old from Conklin, N.Y., suspected of killing 10 people Saturday in a Buffalo, N.Y., supermarket, appears to represent a new generation of white supremacists. They are isolated and online, radicalized on internet memes and misinformation, apparently inspired by livestreams to find fame through bloodshed, much of it propelled by convoluted ideas that the white race is under threat from everything from interracial marriage to immigration.

“Now you have this new ironic world of killers,” said J.J. MacNab, a fellow at George Washington University’s program on extremism. “It’s a different world — just a constant flow of bad statistics, bad memes, bad lies about the people they want to hate.… That’s the 4chan way: You say things that are outrageous that you don’t necessarily believe — and over time you come to believe.”
Unlike the white supremacists of old — from the Ku Klux Klan to newer neo-Nazi terror groups such as the Base or the Atomwaffen Division — the new recruits to racist 4chan and 8chan forums are often teenage boys in high school, MacNab said. They act out their rage at a time of dimming economic opportunity for some young people and the changing demographics of a country they have been told no longer has a place for them.
“They piggyback on each other’s crimes and, as each one became more famous, then just absolutely made it more desirable for them to copy,” MacNab said. “The joke is always: Who can beat the kill number? … To them, it’s like a video game. How do you score better than the last one?”
World & Nation
The 10 people who died in a racially motivated shooting at a Buffalo, N.Y., grocery included a store security guard, a church deacon volunteering to pick up groceries, a woman caring for a brother recovering from cancer and a father buying his young son a birthday cake.

Armed with a high-powered rifle scrawled with a racial epithet, the suspect broadcast his killing spree live on Twitch, a platform popular among young gamers, and published a 180-page manifesto that espoused the racist “replacement theory,” the idea that white Americans are at risk of being replaced by Jews and people of color.

Identifying as a white supremacist fascist with neo-Nazi beliefs, Gendron wrote that low white birth rates around the world represent a “crisis” and “assault” that “will ultimately result in the complete racial and cultural replacement of the European people.”
Experts say replacement theory — whose label was first coined in France by the white nationalist writer Renaud Camus in his 2011 book “Le Grand Remplacement” — has inspired a steady stream of violent racist gunmen in the United States in recent years, from the massacre at the Tree of Life synagogue in Pittsburgh in 2018 to the killing of one congregant and injury of three others at a synagogue in Poway, Calif.
While Gendron ultimately was motivated by a mass killing outside the U.S. — Brenton Tarrant’s 2019 massacre of worshipers in Christchurch, New Zealand — he lauded in his manifesto the perpetrators of racially motivated massacres in the U.S. These included Dylann Roof, who killed nine Black parishioners at a church in Charleston, S.C., and Patrick Crusius, who targeted Latinos and immigrants at a Walmart in El Paso. That shooting, which killed 23 people, has been described as the deadliest attack on Latinos in modern American history.
White supremacist and far-right killers have dominated the extremist homicide totals since 2018, said Brian Levin, director of the Center for the Study of Hate and Extremism at Cal State San Bernardino. Over the last two years, there was a historic upward shift overall in the frequency of anti-Black hate crime across the U.S., Levin said.
World & Nation
Buffalo residents expressed horror, anger and grief over a mass shooting that left 10 dead at a grocery store in a predominantly Black neighborhood.

“We saw a concerning historic inflectional spike in anti-Black hate crime and online invective in 2020 and 2021 with increased violence, but without the kind of multi-fatality attacks that previously accompanied such spikes, until now,” Levin said. “This shooting is an extension and return to mass acts of violence.”
The lull in hate-driven mass shootings was partly because the pandemic shut down schools, malls and places where crowds of people congregated, Levin said. But also because federal law enforcement paid closer attention to extremists on online apps such as Telegram after the El Paso shooting in 2019, said Michael Edison Hayden, senior investigative reporter with the Southern Poverty Law Center’s Intelligence Project.
Although such attacks appear to target specific communities, they are actually driven by a set of larger white power ideologies, said Kathleen Belew, assistant professor of history at the University of Chicago who studies extremism.
Belew, author of “Bring the War Home: The White Power Movement and Paramilitary America,” said racist radicalization was not a Southern or regional problem. The Buffalo attack was clearly related to racially motivated attacks in the U.S. in recent years, from the Pittsburgh synagogue to the El Paso Walmart.
“Radicalization is happening all the time around our country,” she said.
Running Gendron’s manifesto through plagiarism software, Belew found that significant chunks were lifted from the manifesto of the Christchurch shooter. But Gendron also appeared to have written portions himself, including his support for replacement theory.
“Immigrants are one threat, the presence of African Americans is another one, and Jews who are allegedly controlling these plots to eradicate the white race,” Belew said. “There’s a hyperfixation on the white birth rate and on white women having white children and the violent defense of that system.”
Although white supremacists such as Gendron may become radicalized online, they were also incited by the spectacle of the Jan. 6, 2021, insurrection: “The Capitol attack was a radicalization action that dramatically increased online activity in spaces like those the Buffalo shooter is believed to have frequented,” Belew said.
World & Nation
Authorities say the suspect in the Tops Friendly Markets shooting deliberately traveled to an area with a high concentration of Black residents.