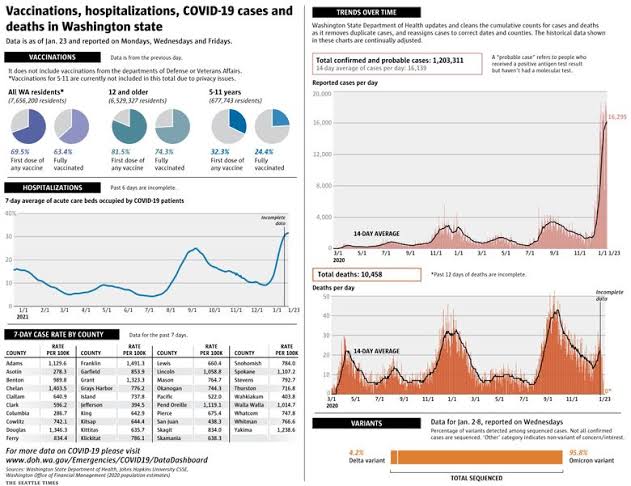 Editor’s note: This is a live account of COVID-19 updates from Wednesday, May 4, as the day unfolded. It is no longer being updated. Click here to see all the most recent news about the pandemic, and click here to find additional resources.
Pfizer officials are planning to show U.S. regulators findings on the effectiveness of their COVID-19 vaccine for children under 5 by early June.
The company is currently testing three extra-small doses of its vaccine for the youngest group of U.S. children after its two previous shots did not provide strong enough protection against the virus.
Meanwhile, several U.S. cities were recently propelled into COVID-19 high-risk categories meant to trigger mask mandates due to increases in reported infections.
The Centers for Disease Control and Prevention is still urging people to mask up, but few jurisdictions have brought back mask mandates.
We’re updating this page with the latest news about the COVID-19 pandemic and its effects on the Seattle area, the U.S. and the world. Click here to see the rest of our coronavirus coverage and here to see how we track the daily spread across Washington.

The World Health Organization said Wednesday that the number of newly reported coronavirus cases and deaths globally continued to fall in the last week, continuing a decline that first began in March.
In its weekly report on the pandemic, the U.N. health agency said there were about 3.8 million new infections and more than 15,000 deaths last week, a 17% and 3% drop on the week respectively. But those figures are believed to be a significant underestimate of COVID-19’s true toll as increasing numbers of countries abandon widespread testing and surveillance.
Still, the WHO noted that cases rose by about a third in Africa and 13% in the Americas. There was also a nearly 70% jump in deaths reported in India, although that was attributed to delayed reporting rather than a recent surge of disease.

The United Nations said Wednesday that the number of people without enough to eat on a daily basis reached all-time high last year and is poised to hit “appalling” new levels as the Ukraine war affects global food production.
Almost 193 million people in 53 countries suffered acute food insecurity in 2021 due to what the U.N. said was a “toxic triple combination” of conflict, weather extremes and the economic effects of the coronavirus pandemic.
The U.N. said the total number of people without adequate food every day increased by 40 million last year, confirming a “worrisome trend” of annual increases over several years.
The figures appeared in the Global Report on Food Crisis, which is produced jointly by the U.N. Food and Agriculture Organization, the World Food Program and the European Union.

Read the story here.
Just days into what was supposed to be the Seattle cruise industry’s comeback from COVID, a cruise ship steamed into Elliott Bay with dozens of passengers infected with the illness.
Carnival Cruise Line has declined to say how many passengers aboard the Carnival Spirit, which arrived Seattle Tuesday, tested positive for COVID.
The vessel’s crew “managed a number of COVID cases” during the journey from Miami via the Panama Canal, a Carnival spokesperson said in an email Wednesday.
But some passengers said there were more than 100 cases aboard, according to local media accounts.
“They didn’t have enough staff to handle the emergency that was happening, period,” passenger Darren Sieferston told KING 5. “They were overwhelmed and they didn’t have a backup course in how to handle about 200 people affected with COVID. We all suffered.”
Carnival officials didn’t comment on those reports.
“There were no serious health issues, and while some guests showed minor symptoms, most were asymptomatic,” spokesperson Matt Lupoli said in an email Wednesday. The company is providing “transportation and lodging support for guests who needed to quarantine per CDC guidelines.” Those passengers are reportedly staying in Seattle-area hotels.
According to the CDC, the Carnival Spirit meets the threshold for a CDC investigation, which means 0.3% or more of the ship’s approximately 3,054 passengers and crew tested positive for COVID. The ship is considered “highly vaccinated,” with 95% or more of travelers vaccinated against COVID-19.
Of the 92 cruise ships operating in U.S. waters, 76 have reported at least one COVID case among passengers or crew members, according to the CDC’s cruises dashboard. Carnival has 22 cruises operating; all but four have positive cases.

Read the story here.
An increase in COVID-19 infections around the U.S. has sent more cities into new high-risk categories that are supposed to trigger indoor mask wearing, but much of the country is stopping short of bringing back restrictions amid deep pandemic fatigue.
For weeks, much of upstate New York has been in the high-alert orange zone, a Centers for Disease Control and Prevention designation that reflects serious community spread. The CDC urges people to mask up in indoor public places, including schools, regardless of vaccination status. But few, if any, local jurisdictions in the region brought back a mask requirement despite rising case counts.
In New York City, cases are again rising and this week crossed the city’s threshold for “medium risk,” indicating the widening spread of the subvariant knowns as BA.2 that has swept the state’s northern reaches. But there appears to be little appetite from Mayor Eric Adams to do an about face just a few months after allowing residents to shed masks and put away vaccination cards that were once required to enter restaurants and concert halls. Adams has said the city could pivot and reimpose mandates but has stressed that he wants to keep the city open.
“I don’t anticipate many places, if any, going back to mask mandates unless we see overflowing hospitals — that’s what would drive mask mandates,” said Professor David Larsen, a public health expert at Syracuse University in upstate New York, whose own county is currently an orange zone.
“People are still dying, but not in the same numbers,” he said.

Read the story here.
If you’ve used up the rapid tests you ordered in January, there are still rapid tests available from both Washington state and the federal government.
The federal government launched its site, COVIDTests.gov, in January. Originally, each household was able to request one order of four tests. Now, White House officials say orders are limited to two per household, with each order containing four rapid antigen tests. The tests usually ship within 12 days, according to the White House.
Washington state also in January launched its website to order free tests, sayyescovidhometest.org.
Kits should arrive about one to two weeks after ordering, according to the site.

Passengers on a Carnival Cruise ship that docked Tuesday in Seattle say more than 100 people aboard the ship tested positive for COVID-19 and the ship was overwhelmed.
Multiple people say they’re in quarantine at Seattle-area hotels after testing positive or being exposed to someone with COVID-19. Carnival Cruise Line would not confirm how many people tested positive, but said there were a number of positive cases, KING5 reported.
Darren Sieferston, a passenger on the cruise from Miami to Seattle, is in quarantine after testing positive. He said the crew’s response was chaotic.
“They didn’t have enough staff to handle the emergency that was happening, period,” said Sieferston. “They were overwhelmed and they didn’t have a backup course in how to handle about 200 people affected with COVID. We all suffered.”
Passengers tell KING they waited hours for meals, weren’t properly isolated and couldn’t get ahold of medical staff.
“We couldn’t call anybody … Basically, we sat in the room, you call and it would ring, ring, ring and ring all day long,” said Sieferston.
Carnival said there were no serious health issues. The company’s website says guest are required to be fully vaccinated and tested before a trip. Some exemptions are accommodated with proper testing.

A handful of coronavirus cases have emerged among people who attended the White House Correspondents’ Dinner over the weekend, the president of the correspondents’ association said Tuesday.
Steven Portnoy of CBS News Radio, who leads the White House Correspondents’ Association, said the cases he knew of so far numbered in the “single digits.”
Among those who tested positive after the gala — an annual event that skipped two years because of the pandemic — was Steve Herman, a chief national correspondent for Voice of America. Jonathan Karl, ABC News’ chief Washington correspondent, also tested positive, according to a person familiar with the matter.
Official case counts in Washington have largely been decreasing since the winter omicron surge, but there has been a modest increase since mid-April. The true number of cases is uncertain, as home tests generally are not officially reported and asymptomatic people may not realize they are infected and capable of spreading the virus.
Many had wondered whether it was advisable to gather a crowd of 2,600 into the packed hotel ballroom of the Washington Hilton hotel. Their concerns were underscored after dozens of people, including several members of President Joe Biden’s Cabinet, recently tested positive after attending a smaller political gathering, the Gridiron Dinner.