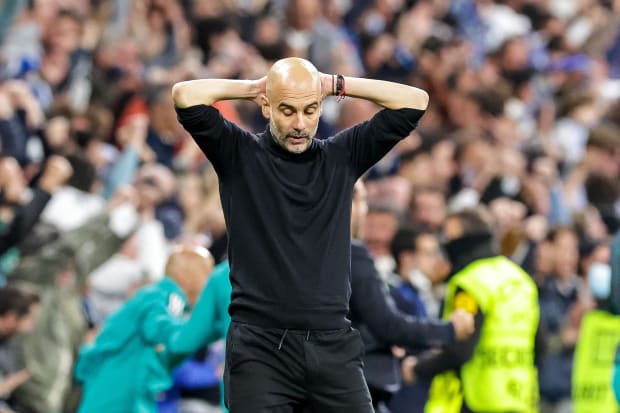 Manchester City have four games to save their season.
Less than three weeks ago, Pep Guardiola’s team were being talked up as potential treble winners.
Now they face the very real prospect of ending the season completely trophyless should they drop a point down the Premier League’s home straight.
City are still the favorites to win the EPL ahead of rivals Liverpool.
But City had been favorites to win the Champions League too.
City carried that tag way before Riyad Mahrez scored 73 minutes into Wednesday’s semi-final second leg in the Bernabeu. That goal gave his side a deserved 1-0 lead over Real Madrid on the night, 5-3 on aggregate.
What happened next will take some getting over, Guardiola has admitted.
Rodrygo scored twice from Real’s first two shots on target in the last minute to force extra time, where a Karim Benzema penalty knocked City out 6-5 on aggregate.
After the game, Guardiola said, as quoted by the Manchester Evening News: “We need time now. We have to do it with our people.
Pep Guardiola pictured looking dejected during Manchester City’s 3-1 defeat at the hands of Real Madrid
IMAGO/Pro Sports Images/Nigel Keene
“The players gave everything. We were so close. We couldn’t do it. In the history of football this happens.”
On the impact that Real’s fans had, he added: “With the people supporting them it’s more difficult.
“This [result] will have a positive impact on the Real players. On us? I don’t know. They won, that’s it.”
While Guardiola conceded that his players will require time to get over their spectacular collapse, they must quickly regroup in time to face Newcastle at the Etihad Stadium on Sunday.
Liverpool will have the chance to apply pressure by going top of the table on Saturday if they beat Tottenham at Anfield.