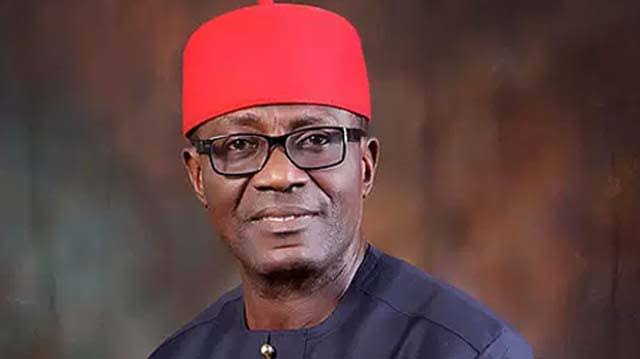 NACCIMA National President, Ide Udeagbala
Citing the country’s high unemployment rates and inability to meet economic development objectives, the Nigerian Association of Chambers of Commerce, Industry, Mines and Agriculture (NACCIMA) has warned that the nation’s economy continues to operate below productive capacity, as national output remains below population growth.
According to the chamber, the economy is still heavily import-dependent for consumption and production as well as on crude oil for government revenues and foreign exchange.
As crude oil can no longer meet government demands for revenue, NACCIMA expressed worry that the nation was falling into a dependency on foreign debt to run, therefore necessitating the need for a turnaround and repositioning of national direction.
Addressing journalists yesterday, NACCIMA President, Ide Udeagbala, stated that the strategy of funding increasing government recurrent expenditure through public debt and the introduction of new taxes only provide short-term benefits in exchange for long-term negative impact.
He said: “The Association notes with some concern the rising cost of government with the passage of a National Budget of N17.1 trillion for 2022, more than double the budget for 2017 which stood at N7.4trillion. With an additional approval of N4 trillion for fuel subsidy, warnings of a fiscal cliff for our economy are on the rise.
“With Nigeria’s debt service to revenue ratio projected to reach 94 percent in 2022 and subsidy spending expected to overshadow capital expenditure (of N3 trillion) in 2022, we cannot stress enough the need for the legislative and executive arms of government to take radical steps to reverse this trend.
“It is clear today that the pro-debt argument put forward in the past, that Nigeria’s public debt is relatively sustainable, has run its course. It is now generally accepted that the current levels of debt service payments are considerably high and unsustainable given dwindling government revenues. Economic experts and analysts warn of looming macroeconomic instability if the trend of continued rising debt without corresponding revenue increase remains.”
Udeagbala, therefore, advocated a need for wider stakeholder consultations in policy design and implementation, a cohesive strategy to ensure that policies do not cancel each other out, and the need to leverage the private sector for infrastructure development, productivity, education, job creation, energy sufficiency, and security.
He added the need for a cohesive strategy by the legislative and executive arms of government to manage government expenditure in the short term as the productive capacity of the economy is expanded to boost the tax base.
On insecurity, he urged the Federal Government, through its security agencies, to intensify efforts to counter and end the activities of kidnappers, bandits, terrorists, and other perpetrators of violence.
According to him, insecurity dampens investor confidence and labels the country as unsafe to do business, while such a situation does not present the country in good light to the rest of the world.
NACCIMA’s deputy president, Dele Oye, added that government needs to be serious about cutting down on costs, considering how the budget deficit continues to rise.