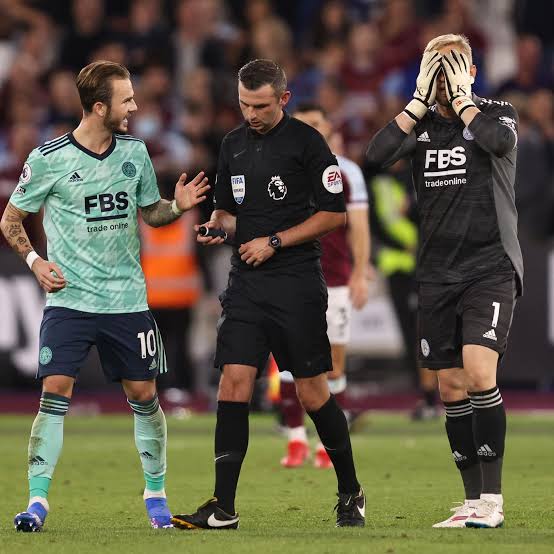 Filed under:
Can a great second half make up for a dire first half? Yes. Yes it can.
Leicester City closed out their 2021/22 campaign in style, defeating Southampton by a score of 4-1 at the King Power today. The dire first half resulted in no shots on goal, but the floodgates opened in the second period, with goals from Player of the Year James Maddison, Jamie Vardy, and a late brace from Ayoze Perez.
With rumours of a squad shakeup coming this summer, manager Brendan Rodgers either fielded his strongest XI in an attempt to close out the season strong or handed some of the likely departures a final bow in front of the home crowd. Perhaps a little of both: Kasper Schmeichel (C), Timothy Castagne, Wesley Fofana, Jonny Evans, James Justin, Youri Tielemans, Nampalys Mendy, Kiernan Dewsbury-Hall, James Maddison, Harvey Barnes, and Jamie Vardy.
“It might be a bit much to expect this half to explode into life” – One of the commentators on 44 minutes. I have watched a great deal of football. I have watched a depressing amount of really poor football. What I don’t think I’ve ever seen prior to today is a half of football so devoid of incident. 45 minutes were played and they were excruciating to watch.
It’s not that either side lacked attacking intent; they lacked attacking ability. Neither team could get any traction, and I mean this both literally and figuratively as players were falling to the ground left, right, centre, and any other direction you might imagine.
Neither keeper had a save to make. I suppose if you’re into pointless numbers, you might find the fact that both sides committed as many fouls as they took shots, but that’s a stretch, isn’t it? Even Jon Moss, refereeing his final Premier League match, wasn’t able to must any of his characteristically random decisions. His heart just didn’t seem to be in it.
We had a couple of demi-chances: Castagne headed over from a Maddison cross when he really should have hit the target. Vardy, at full stretch, just missed getting on the end of a cross from Castagne, that didn’t need much of a touch to turn it into the net. That was it. That’s all you missed if you didn’t watch the first half. That’s also all you saw if you did watch it.
There were no changes at the half because why would there be with things going so well? After Moss decided to let a couple of clear yellow card challenges go, the Saints took things into their own hands and present their hosts with a goal in the most comical of fashions.
A long ball forward by Schmeichel should have been meat and potatoes for the Soton defenders, but Lyanco decided to turn vegan at the worst time. His initial header was almost straight into the air. His second was an attempt to pass back to keeper Alex McCarthy but he sold him horribly short and found the feet of the alert Vardy. Leicester’s talisman’s shot was parried, but only as far as Madders who tucked it neatly into an open goal.
It should have been two only moments later. Dewsbury-Hall found Barnes in acres of space and the Foxes were in with a 2-on-1. The academy product bore down on McCarthy’s goal and, had he looked up, he would have seen Vardy all alone on the right. Instead, he tried to take on the defender himself and had to settle for a corner.
On the hour, Rodgers made his first change, taking off Leicester’s Young Player of the Year, Dewsbury-Hall, and introducing Ayoze Perez. Things got very tetchy as both sides carried on playing with Stuart Armstrong and Ayoze on the deck with injuries and Moss not seeming interested in intervening.
The next change came on 70’, with Ricardo coming on for Castagne. Southampton were pouring forward in search of an equaliser without having a great deal of success. This left the defence stretched and it turns out City are still a pretty good counter-attacking side.
Barnes won the ball in his own half and beat three defenders before launching a diagonal pass towards Madders on the right. Vardy intervened and took the ball himself, cutting inside this marker and blasting it inside the near post. That was Barnes’ last contribution as Ademola Lookman came on in his stead.
Southampton fans singing: “Jamie Vardy, your wife is a grass.”

Vardy scores for Leicester, runs to the away fans, points at the name on his shirt.

Never change, Jamie. Never change. #lcfc #LeiSou
You’d think they’d learn. Also, please, please let them never learn.
Saints got one back just before the 80’ mark. James Ward-Prowse carried the ball past Tielemans in the box. Moss blew for the penalty and VAR couldn’t find enough evidence to overturn it. Ward-Prowse took it himself, beating Schmeichel with an unstoppable ball high and to the left.
Not to worry though, as the two-goal cushion was restored moments later. Madders whipped in a cross to the far post. It bounced awkwardly, but as he always seems to do against Southampton, Ayoze calmly directed it into the back of the net. That was the last touch for Madders, who made way for Daniel Amartey.
There were seven minutes of time added on due to a clash of heads between Evans and Adam Armstrong early in the half. That was more than enough time for the Foxes to add another. Tielemans found Ricardo’s run on the right. The Portuguese fullback pulled it back for Ayoze, who hit it first time and blasted it into the back of the net to provide the final 4-1 margin.
“There was some top-level counter-attacking play. Then that fourth goal is as resounding as you’d like, it turned out to be one of those good days.” – Matt Elliott pic.twitter.com/7OjOSPAYLy
In his day, Matty Elliott would have clattered Ayoze into the cheap seats on that attack. For those of you who don’t remember him, think “Robert Huth, but with better hair.”
I know most people were watching the title-deciders and the relegation matches, but for the Foxes’ faithful, this was a fine way to close out a difficult season. Like most of this campaign, it was difficult, it was often hard to watch, but it ended better than expected. Mad love to everyone who left it all on the pitch in as meaningless a match as you’re likely to see.
If you’re keeping score, and if not, shame on you, here are the key numbers for our primary strike force in all competitions:
James Maddison: 18 goals, 12 assists
Harvey Barnes: 11 goals, 13 assists
Jamie Vardy: 17 goals, 2 assists (in only 24 starts)
That’s an absolutely mad strike force for the Foxes. In theory, Vardy will show his age at some point, but there’s no evidence to suggest it will happen any time soon. Playing only one match a week next season, there’s ample cause to hope for a quick return to European competition.
The victory, combined with Wolves’ defeat at Anfield, means that the Foxes finish 8th on the table with 52 points from 38 matches. That’s our joint 4th-highest finish in the Premier League after That Season and the last two under Rodgers. How far has this club come that this constitutes a disappointing season? The next match is unknown at this point as we welcome the silly season. Who’s in? Who’s out? Who knows (not that it will stop us from speculating)?
Thank you all for staying with us for yet another season at the Fosse Posse. I hope you’ve enjoyed what we’ve done as much as we’ve enjoyed doing it.