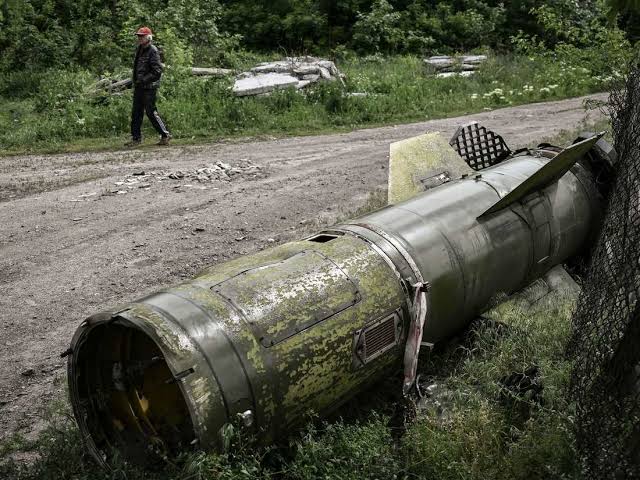 NPR Staff
A missile lies on the ground in the city of Lysychansk, in the eastern Ukrainian region of Donbas, on Thursday. Ukraine said the war in the region hit maximum level. Aris Messinis/AFP via Getty Images hide caption
A missile lies on the ground in the city of Lysychansk, in the eastern Ukrainian region of Donbas, on Thursday. Ukraine said the war in the region hit maximum level.
As Thursday draws to a close in Kyiv and in Moscow, here are the key developments of the day:
Battling in eastern Ukraine reached a “maximum intensity,” the Ukrainian deputy defense minister said. Russia continued to make incremental gains, sending smaller units to go after smaller towns in the east’s Donbas region, according to the Pentagon. A senior U.S. defense official said that 85 howitzers are now in Ukraine and over 400 Ukrainian soldiers were trained to use them. In Ukraine’s northeast, meanwhile, a governor said Russia was shelling and hitting civilians in Kharkiv.
Russian President Vladimir Putin said Moscow would make a significant contribution to overcome global food shortages in return for sanctions relief, according to a Kremlin readout from his phone call with Italian Prime Minister Mario Draghi. The British foreign minister swiftly responded that “Putin is trying to hold the world to ransom.” Western powers accuse Russia of blocking key Ukrainian exports like wheat from access to ports currently under the control of Russia’s Black Sea fleet. Yet Russian fertilizer and grain sales have also been snagged by sanctions — a contributing factor to rising world food prices.
Ukraine’s President Volodymyr Zelenskyy sharply criticized suggestions by former U.S. Sectary of State Henry Kissinger that Ukraine should cede some territory to Russia as a way to end the war. Speaking in his nightly address, Zelenskyy castigated Kissinger for “emerging from the deep past and saying that a piece of Ukraine should be given to Russia.” Kissinger, who turns 99 on Friday, called for Russia-Ukraine peace negotiations to start within the next two months during a speech at the World Economic Forum in Davos, Switzerland, on Tuesday. He also suggested the two sides return to the status quo before Russia’s February invasion — when Russia already controlled parts of eastern and southern Ukraine. Zelenskyy compared Kissinger’s remarks to Europe’s appeasement of Nazi Germany before World War II.
Putin portrayed the flight of foreign companies as a win, saying “it’s for the best,” that Russia could fill their niches. Starbucks and McDonald’s are among the major companies that have left. Speaking via video to a regional economic forum, Putin also insisted Russia has grown stronger due to Western sanctions. The Kremlin’s own economists have painted a more dire picture as the sanctions continue to bite.
Finnish Prime Minister Sanna Marin became the latest leader to visit Ukraine. She met with President Zelenskyy in Kyiv and visited Irpin and Bucha. Concerned by neighboring Russia’s aggression, Finland applied to join NATO earlier this month. French President Emmanuel Macron had a phone call Thursday with Turkish President Recep Tayyip Erdogan and urged him to drop a threat to veto Finland‘s bid to join the defense alliance.
Lithuania has become the first European country to stop using Russian gas.
Here’s how much it could cost to rebuild Ukraine — and who would pay for it.
“Every time I see those buildings bombed in Ukraine, I feel that my old neighborhood is coming down.” Hear from Russian dissidents on NPR’s Here & Now.
Russia’s war in Ukraine is changing the world: See its ripple effects in all corners of the globe.
You can read more daily recaps here. For context and more in-depth stories, you can find more of NPR’s coverage here. Also, listen and subscribe to NPR’s State of Ukraine podcast for updates throughout the day.
Loading…
Sponsor Message
Become an NPR sponsor