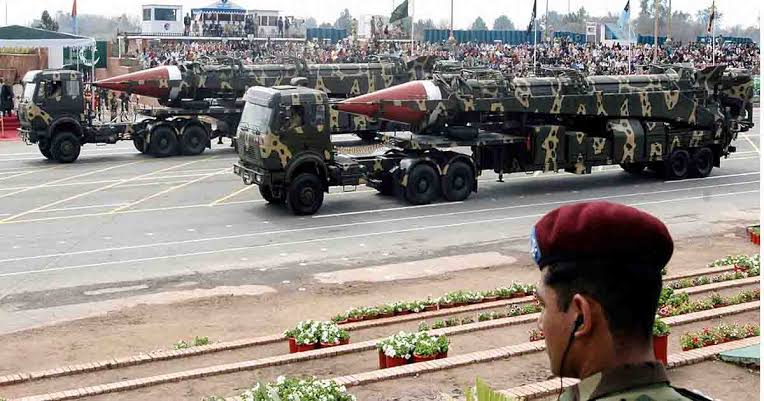 As a confident nuclear power, Pakistan is devoted to the promotion of a secure and peaceful regional environment and stability at the regional and global levels. Pakistan has been actively contributing to the international efforts for strengthening global norms on arms control, non-proliferation and disarmament affairs.
On 28th May 2022, Pakistan marked the 24th year of nuclear tests, the country reaffirmed its resolve to preserve Pakistan’s sovereignty, territorial integrity and deterrence against any form of aggression by its enemies. The Nuclear Tests anniversary brings the about the bliss of Pakistan’s achievement to protect the land and nation. It was a strategic response to India’s nuclear tests of Operation Shakti held on May 11 and 13 the same month which had transformed the strategic outlook of South Asia. The Indian nuclear tests left no option for Pakistan other than to restore its national security interests and gain its own nuclear capability.
Historically, both India-Pakistan have had troubled and tense relations for more than five decades’ including three major wars. Until the momentous occurrence of nuclear testing by both India and Pakistan which took place the regional strategic dynamics of South Asia forever.
Actually, the nuclear explosions by Pakistan in 1998 on 28th May, were conducted against the background of an existential threat of India’s aggression represented by its nuclear tests. The balance of threat was neutralized which made Pakistan’s defense invincible. The nuclear tests led Pakistan to join the international nuclear club, and become the seventh nuclear power status among nuclear-armed states.
Today in 1998, PM Nawaz Sharif rejected pressures & inducements in a bold show of leadership & made Pakistan nuclear power of the world. Now we are resolved to turn it into an economic power. My gratitude to all those who helped make our defense invincible.
Youm-e-Takbir Mubarak
— Shehbaz Sharif (@CMShehbaz) May 28, 2022

This strategic capability settled a gap of conventional disparity between Pakistan and India and established deterrence dynamics in consort with the balance of power. It provided Pakistan a strategic advantage, along with ensuring stability across the region. The critical bilateral relation dynamics between Pakistan and India reassure the deterrence stability due to presence of nuclear capability in the region. However, crisis stability has been constantly under stress.
In the early 1970s, Pakistan was compelled to initiate a nuclear program and successfully demonstrated in 1998. Since then the role of nuclear weapons is significant to deter aggression from India by controlling the escalation trajectory to turn into a nuclear war. The recent episodes of Pulwama in 2019 and the Indian Brahmos missile fiasco in 2022 are illustrations of dangerous crises between nuclear Pakistan and India which fortunately was buttressed nuclear deterrence stability.
On the other hand, the day recalls for the efforts and contributions of its scientists, engineers and technicians for the security and growth of Pakistan. As a confident nuclear power, Pakistan is devoted to the promotion of a secure and peaceful regional environment and stability at the regional and global levels. Pakistan has been actively contributing to the international efforts for strengthening global norms on arms control, non-proliferation and disarmament affairs. It follows updated international standards on export controls, nuclear safety and security at the national level.
The other bright side of Pakistan’s nuclear power is the advancement in peaceful uses of nuclear energy. In 2021, on 23rd March, K-2 was connected to the national grid and effectively started commercial operation on 21st May 2021. K-3 also achieved the milestone of grid connection on 4th March, 2022 and its commercial operation is expected very soon.
This use of nuclear power adds much cleaner, reliable and affordable electricity to the national energy mix in order to achieve sustainable development goals (SDGs). This accentuates the significant role of nuclear science and technology in the socio-economic development of the country and the welfare of its people. Likewise, regarding nuclear power generation, Pakistan has employed nuclear technology in diverse areas including cancer diagnosis and treatment, public health, agriculture, environment protection and industry.
Of course, each capability comes with a spectrum of strengths, challenges and opportunities especially since nuclear power is one of the world’s paramount achievements which not only changes the fate of a country but also its existence and conducts in regional and global matters.