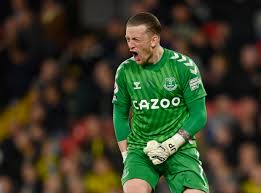 Watford 0-0 Everton
VICARAGE ROAD — A point in the hand is worth two in the pub, or something like that. Especially when it takes you two points clear of your rivals for the drop.
Everton would have wanted all three against already-relegated opponents, of course. That said, they might have enough given the retreat of Leeds United.
The same might be said of Burnley, despite a fixture list that includes difficult away games against Tottenham Hotspur and Aston Villa before they host Newcastle United on the closing weekend.
Until Everton’s successive wins against Chelsea and Leicester City, this contest was conceived as a double obit. The idea of a polar season in which Liverpool won the Premier League and Everton left it gave the run-in an unprecedented duality.
Though Everton might still suffer the ultimate “big club” shame, it requires Leeds and Burnley to engage the comeback energy of Real Madrid without the power output of Karim Benzema and Luka Modric.
A glance at their bench renders absurd the reality that Everton have created for themselves. Dominic Calvert-Lewin, Allan, Andre Gomes, Dele Alli and Tom Davies have enough Premier League qualities to push for European inclusion.
But that does not take into account the insidious creep of doubt, of nerve failure, of form drain and other intangibles that rob a team of conviction and confidence.
Southampton:
Everton:
Burnley:
Leeds:
They were met here by a Watford team disturbed by the clumsy appointment of a new manager and the messy departure of the incumbent. Roy Hodgson claims his failure to acknowledge the Kop early in his Anfield reign contributed in part to his Liverpool failure. By acknowledging fans of former club Crystal Palace at Selhurst Park and not his own at the weekend any warmth associated with his departure was stripped from the piece.
The truth is neither Liverpool nor Watford fans fancied Hodgson. The cache deficit killed the Anfield experience, and he ignored, to his detriment, the prompts of Father Time as Watford called. Pity, since Hodgson’s career achievements are many and significant.
Frank Lampard would arguably sign now for the career Hodgson has had, managing 16 teams in eight countries as well as the English national team. He would at least get to order dinner in Italian, Swedish, French, German and a little convoluted English.
Hodgson, hit by a post-relegation injury crisis – entirely co-incidental of course – was forced into seven changes, yet it was the visitors who initially suffered in the company of strangers. Perhaps released from consequence, a reshaped Watford set out full of vim and enterprise.
The sizeable blue wall behind a goal did its best to sing Everton into life. Eventually Alex Iwobi heard them, and began to fire up his side. Either that or news that Leeds were losing and down to ten men at home to Chelsea had filtered through.
Everton carved open Watford’s left side repeatedly via Iwobi, Demarai Gray and Anthony Gordon, or combinations thereof. The final pass eluded them all, which did little to settle Lampard’s pulse rate. It is his own fault. In this phase of the survival push, Lampard has recast Everton as a counter-attacking unit, but not all are familiar with their roles. The reluctance, for example, of Fabian Delph or Abdoulaye Doucouré to surrender defensive positions to support the attack meant Everton frequently wasted the overloads out wide.
The solemnity with which Lampard conducts his role is entirely appropriate in this context. There is little joy to be had watching his team. At some point, if Lampard is to make something of the post he must, you imagine, pump some joy into the experience or what is the point?
For the fans it was enough that their team were at least in the ascendency, albeit against a poor team. Richarlison deserved reward for the hard yards covered, largely in isolation. He might have had it too had Ben Foster not proved his equal with a fine, diving save.
In another moment of danger Richarlison chose to drill the ball across the six-yard box. It was the right thing to do but in retrospect he should have had a go, for all the chance a team-mate had of putting a boot through it. And so towards its goalless conclusion the game ground on. Everton’s next two fixtures are at home. Having beaten Manchester United and Chelsea at Goodison to begin their revival, wins against Brentford and Crystal Palace in the next seven days ought to seal it.
All rights reserved. © 2021 Associated Newspapers Limited.