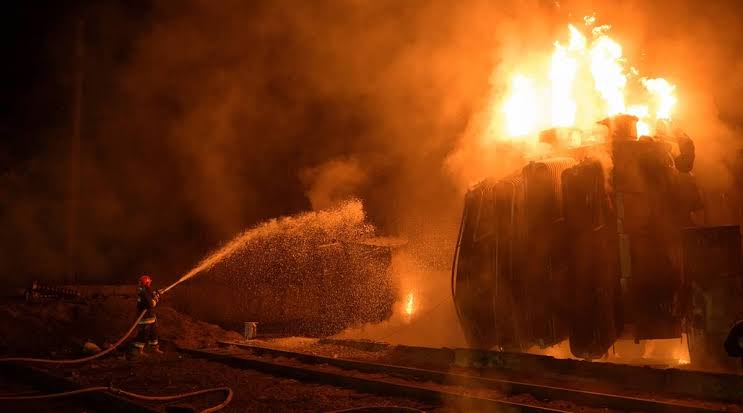 The bus had been heading to Poland, the ministry said on Facebook. It did not say whether it was carrying any people fleeing the war in Ukraine following Russia’s invasion.
The dead from Tuesday’s collision included 24 passengers and the drivers of both the bus and the minibus. Twelve others were hurt including the driver of the fuel truck, the ministry said. (Reuters)
Russia’s defence ministry said on Wednesday that it had disabled six railway stations in Ukraine used to supply Ukrainian forces with foreign weapons.
The ministry also said it had hit 40 Ukrainian military targets, including four ammunition depots. There was no immediate reaction from Kyiv. (Reuters)
The European Union’s leader on Wednesday called on the 27-nation bloc to ban oil imports from Russia in the sixth package of sanctions targeting Moscow for its war in Ukraine. European Commission President Ursula von der Leyen also proposed that Sberbank, Russia’s largest bank, and two other major banks be disconnected from the SWIFT international banking payment system.
Today we are presenting the sixth package of sanctions.

First, we are listing high-ranking military officers and other individuals who committed war crimes in Bucha.

We know who you are.
And you will be held accountable. pic.twitter.com/WO2S8ly0qw

Von der Leyen, addressing the European Parliament in Strasbourg, France, called on the EU’s member nations to phase out imports of crude oil within six months and refined products by the end of the year. “We will make sure that we phase out Russian oil in an orderly fashion, in a way that allows us and our partners to secure alternative supply routes and minimizes the impact on global markets,” von der Leyen said.
Soon we will celebrate Europe Day.
A day to reflect on our Union.
But also on the future of the EU.
Which today, is also written in Ukraine. https://t.co/pxhdYDTvfj

The proposals need to be unanimously approved to take effect and are likely to be the subject of fierce debate. Von der Leyen conceded that getting all 27 member countries — some of them landlocked and highly dependent on Russia for energy supplies — to agree on oil sanctions “will not be easy.” (AP)
US President Joe Biden spoke in an Alabama factory that built the Javelin missiles Ukrainian soldiers used against Russian tanks. Prime Minister Boris Johnson of Britain addressed members of Ukraine’s parliament, extolling their “finest hour.” President Emmanuel Macron of France pressed Russia’s Vladimir Putin by phone to end his “devastating aggression.” Germany helped Finland and Sweden — Russia’s Nordic neighbours once wary of provoking Putin — inch closer to joining Nato. 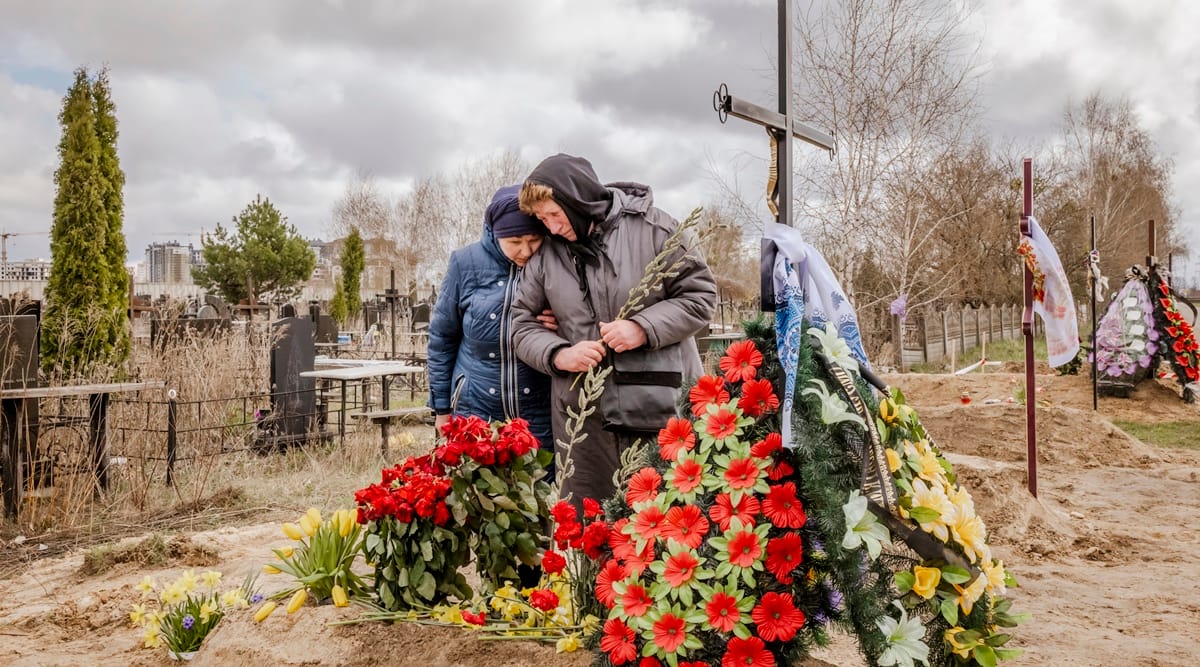 On Tuesday, the leaders of the West sought to capitalise on Russia’s apparent lack of battlefield momentum to show Ukraine support and strengthen its resolve — and its arsenal. (Read more)
The British military believes Russia will make a push to try to seize the cities of Kramatorsk and Severodonetsk in eastern Ukraine. The British made the comment Wednesday in a daily briefing it posts on Twitter about the war.
The British said: “Despite struggling to break through Ukrainian defences and build momentum, Russia highly likely intends to proceed beyond Izium to capture the cities of Kramatorsk and Severodonetsk.” It added: “Capturing these locations would consolidate Russian military control of the northeastern Donbas and provide a staging point for their efforts to cut off Ukrainian forces in the region.”
Russia has deployed 22 battalion tactical groups near Ukraine’s eastern city of Izium in an effort to advance along the northern axis of the Donbas region, Britain said on Wednesday.
Latest Defence Intelligence update on the situation in Ukraine – 04 May 2022

Find out more about the UK government’s response: https://t.co/IvoOTjNz8D

In an update on Twitter, British military intelligence said it was highly likely that Russia intended to move beyond Izium to capture the cities of Kramatorsk and Severodonetsk. (Reuters)
The armed forces of Belarus began sudden large-scale drills on Wednesday to test their combat readiness, the defence ministry of Ukraine’s neighbour said.
The Armed Forces of Belarus have declared a Snap Combat-Readiness Check on all Military Reaction Forces across the Country beginning today, the Belarusian Defense Ministry has said that these Drills do not pose a threat to the Countries Neighbors or the European Community. pic.twitter.com/tEIOhWjm7p

“It is planned that the (combat readiness) test will involve the movement of significant numbers of military vehicles, which can slow down traffic on public roads,” the Belarusian ministry said in a statement. Against the backdrop of the Russian invasion of Ukraine, the ministry said the exercise posed no threat to its neighbours or the European community in general. (Reuters)
When Ukrainian President Volodymyr Zelenskyy autographed a baseball for an American collector in 2019, he likely had no idea it would one day be used to help his nation during a time of need.
Zelensky’s autographed baseball up for auction, proceeds help Ukraine https://t.co/pvgCZ6MwMf pic.twitter.com/XSVXfVe5Ff

The official Rawlings Major League baseball is being sold by Randy Kaplan, a renowned collector of balls signed by world leaders, with a portion of the proceeds going to war relief efforts in Ukraine, auctioneer RR Auction of Boston said Tuesday.
The ball was expected to sell for at least $15,000 but the leading bid as of Tuesday had already exceeded that amount, an RR spokesperson said. (AP)
Shakhtar Donetsk is heading directly to the next Champions League group stage after Villarreal was eliminated in the semifinals on Tuesday. Amid so much turmoil in Ukrainian football, the upgrade should guarantee tens of millions of euros (dollars) in Champions League prize money next season for Shakhtar, which has been touring Europe playing charity games in exile from Russia’s invasion. Shakhtar led the Ukraine Premier League standings when the season was abandoned last month with no official title to be awarded. (Read more)

Damages are seen in an apartment building after Russian shelling in Odesa, Ukraine, Saturday, April 23, 2022. (AP Photo/Max Pshybyshevsky)
Without naming Russia, Prime Minister Narendra Modi Monday said “there will be no winning party in this war, everyone will suffer”. The Prime Minister, who is in Germany, said, “Recent geopolitical events also showed how fragile world peace and stability is, and how interconnected all countries are. From the very beginning of the Ukrainian crisis, we called for an immediate ceasefire, insisting that dialogue is the only way to resolve the dispute. We believe that there will be no winning party in this war, everyone will suffer. That is why we are in favour of peace.”
“Oil prices are skyrocketing due to the turmoil triggered by the Ukraine conflict; there is also shortage of food grains and fertilizers in the world. This has burdened every family in the world, but its impact on developing and poor countries will be even more serious. India is deeply concerned by the humanitarian impact of this conflict. We have sent humanitarian aid to Ukraine on our behalf. We are also trying to help other friendly countries through food exports, oil supplies and economic assistance,” he added.
US House Speaker Nancy Pelosi, who visited Kyiv over the weekend, declared support for Ukraine’s fight against Russia. “America stands with Ukraine. We stand with Ukraine until victory is won. And we stand with NATO,” she said. Pelosi is the highest-ranking US official to have visited the country since the war began. US Secretary of State Antony Blinken and Defense Secretary Lloyd Austin had previously visited Ukraine.