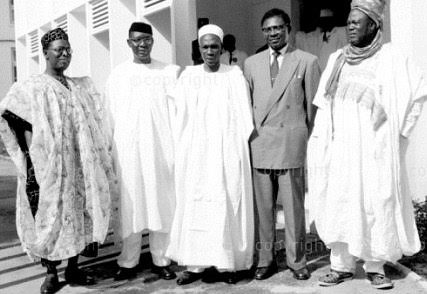 The 2023 presidential and other elections are inching closer. As a precursor to these, primary elections are  being organized to present those who will contest on different parties’ platforms. With the emergence of former Vice President Atiku Abubakar as the presidential candidate of the Peoples Democratic Party (PDP) in the Saturday primary elections, the tempo of politicking is increasing. Right now, people are already talking of 2023 and where power should shift to or why it should not leave a particular zone. Nigeria is still in search of unity, equity and justice.
In each ethnic enclave and political party, there is mutual distrust. Even in the PDP, Nyesome Wike and Atiku behave like the mongoose and the cobra, though there are attempts to reconcile the two men now. And in the All Progressives Congress, followers of VP Yemi Osinbajo and Asiwaju Bola Ahmed Tinubu can, if circumstances permit, pour raw acid on each other’s thyroid glands! This brings up the parable of crabs in a bowl. As long as all of them keep struggling inside it, they feel fine. However, when one of them tries to crawl out of the receptacle, others will pull it back. That is the story of Nigeria and political development.
As for inter-ethnic conflict, that one goes deep! In Nigeria, the Yoruba have a distrust of the Igbo and Hausa-Fulani. They all behave like grown-up cocks thrown into a pit.
However, 64 years ago, Time magazine wrote about the way Nigerian nationalists, at a pre-independence meeting in London, were behaving – suspicion all the way! It was, despite the condescending tone of the report, a symbolism for what would come later among the major nations that make up Nigeria. As short as the story is, it shows that notwithstanding different circumstances in time and space, good writing remains constant in journalism.
Time wrote: ”
Under the great chandeliers of the Lancaster House music room, where Chopin once played for Queen Victoria, the Premiers bickered, shot insults back and forth like poisoned darts.
When the conference took up the ticklish problem of how to protect the rights of minorities among Nigeria’s 250 tribes, Awolowo suggested creating three new states. The North’s Sardauna, not wishing to relinquish any of his territories, vetoed the idea.”
Below is the piece, published in Time on 10 November 1958. It is entitled:

Nigeria: A dream of Utopia

For one month, delighted Londoners watched the 80 ceremonially dressed Nigerians—some with necklaces of animal teeth, others with feathered straw hats, at least one with a jewelled crown—parade into Lancaster House for their historic conference.
Everything possible had been done to make them feel at home.
For the Colonial Office’s big reception at the Tate Gallery, all nude statues were carefully screened so as not to offend Moslems. The Lord Mayor served up a banquet of stewed peanuts and one paramount Chief—His Highness James Okosi II of Onitsha —fulfilled a lifelong ambition: to ride the escalator at the Charing Cross underground station.
In the end, the Nigerians got what they had come for: on Oct. 1, 1960, the largest (373,250 sq. mi.) of Britain’s remaining colonial territories would get its independence (TIME. Nov. 3). But behind the scenes, the conference had revealed ominous signs of trouble to come.
Time, 10 November 1958
From the start, there was a clash between the personalities of the Premiers of the three regions —each more important than the scholarly Federal Prime Minister, Alhaji Abubakar Tafawa Balewa.
In Western eyes, Obafemi Awolowo of the Western Region seemed the most statesmanlike: as the conference began, the London Times carried a full-page ad proclaiming his declaration for freedom under the title “This I Believe,” prepared with the help of an American public relations man.
In contrast, U.S.-educated Premier Nnamdi (“Zik”) Azikiwe of the Eastern Region seemed to have learned more in the U.S. about Tammany tactics than Thomas Jefferson and was somewhat under a cloud as a result of a British tribunal’s 1956 investigation into corruption in his administration.
The North’s Premier, the Sardauna of Sokoto, a haughty Moslem of noble birth, could barely conceal his contempt for his less aristocratic colleagues.
Insults and Accusations.
Under the great chandeliers of the Lancaster House music room, where Chopin once played for Queen Victoria, the Premiers bickered, shot insults back and forth like poisoned darts.
When the conference took up the ticklish problem of how to protect the rights of minorities among Nigeria’s 250 tribes, Awolowo suggested creating three new states. The North’s Sardauna, not wishing to relinquish any of his territories, vetoed the idea. Nor did he like the plan for a centralized police force under the federal government: he much preferred to use his force, which, answerable only to him, can pop a man in jail with no questions asked.
At one point, the Sardauna accused Awolowo of sending his supporters to Israel to be trained as saboteurs in the North —a charge fabricated out of the fact that Western Nigeria has imported agricultural experts from Israel to advise its farmers. Awolowo counter-charged that the Sardauna flogs his prisoners.
At receptions, the delegates sipped their orange juice, icily aloof from one another. In elevators, the conversation would suddenly stop if a delegate from another region got on.
Compromises and Contests.
But as the weeks passed, the Sardauna grudgingly consented to let the constitution carry a bill of rights, though he was so thoroughly opposed to giving the vote to women that the conference decided that this was, after all, not necessarily a “fundamental” right.
The delegates then agreed on a centralized police force, but one that would be administered by a council of representatives from each region. Finally, with their independence from Britain assured (as well as that of the adjacent British Cameroons, should they choose to become a part of Nigeria), the delegates started for home.
Until Nigeria’s federal election takes place next year, the three Premiers will continue jockeying for power, and the fate of Nigeria could well, hinge on who comes out on top. Last week, even as the National Planning Committee of Independence opened its contest for the design of a national flag (first prize: $300), many Nigerians had grave reservations about what lay ahead.
For all its jubilation, Nigeria’s West African Pilot felt obliged to warn: “Independence without difficulties is a dream of Utopia.”
-Time Magazine – Monday, 10 November 1958
-Shared on FB by APC Oyo State, UK

This site uses Akismet to reduce spam. Learn how your comment data is processed.
How Hobbies Help Our Daily Development
How to Inherit Nigeria
Peter Obi: How LP will beat PDP, APC ‘pants down’ in 2023 election
APC appoints Sanwo-Olu, Ganduje, Zulum, others into presidential primary committee
APC group cautions Buhari against plot to impose presidential candidate
Theatre of One Actor in Nigeria
APC Presidential Screening Committee Writing Its Report, Party to Act on Submission
APC and the Hypocricy of Governance