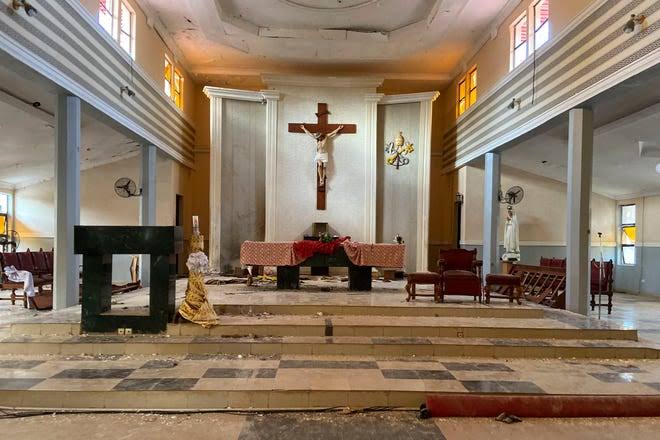 By Shannon Mullen
Washington, D.C. Newsroom, Jun 5, 2022 / 09:13 am
At least 50 people were killed and others injured Sunday when gunmen attacked worshippers at a Catholic church in southwestern Nigeria, according to media reports.
A doctor at a hospital in Owo, a town in the Nigerian state of Ondo, told Reuters that no fewer than 50 bodies had been moved to the Federal Medical Center in Owo and to St. Louis Catholic Hospital.
The attack took place during a Pentecost Sunday service at St. Francis Xavier Catholic Church in Owo, according to Ondo’s governor, Arakunrin Akeredolu.
A video posted on Twitter showed graphic scenes of bodies and blood inside the church. Akeredolu said many children were among the dead.
IGANGAN PROVOCATIVE ONSLAUGHT ONE TOO MANY.

…we have directed the Commanders of the South West Security Network, Amotekun, to convoke a joint security meeting of all Commanders in the South West with a view to commencing joint operations in the region immediately. pic.twitter.com/Kgv0oy1yiL
“I am deeply saddened by the unprovoked attack and killing of innocent people of Owo, worshiping at the St. Francis Catholic Church, Today,” the governor said in a tweet. “The vile & satanic attack is a calculated assault on the peace-loving people of Owo Kingdom who have enjoyed relative peace over the years.”
A state lawmaker, Ogunmolasuyi Oluwole, told the Associated Press the attackers also detonated explosives.
The Vatican released a statement Sunday after Pope Francis learned of the attack.
“The pope learned of the attack on the church in Ondo, Nigeria, and the death of dozens of faithful, many children, during the celebration of Pentecost,” the statement read. “While the details of the incident are being clarified, Pope Francis prays for the victims and for the country, painfully affected in a moment of celebration, and entrusts both to the Lord, to send his Spirit to comfort them.”
Escalating anti-Christian attacks
Nina Shea, a human rights lawyer and expert in religious freedom at the Hudson Institute, a think tank and research center in Washington, D.C., told CNA Sunday that “war-like” attacks against Catholics and other Christians are escalating in Nigeria. Yet most of this violence, until now, has centered in northern Nigeria, while the southwestern part of the country where Sunday’s attack took place has remained relatively peaceful.
“This massacre in a church while filled with Sunday worshippers is an atrocity that we’ve repeatedly seen in northern Nigeria over the years. Those were the work of Islamist extremists,” Shea said.
“While the facts are still emerging about  today’s massacre, it is clear that large scale, war-like attacks on Catholics and other Christians are spreading in a system of impunity,” she continued. “The Buhari government has allowed this continue unabated and fails to protect Nigeria’s churches. This governmental passivity is being seen  as a green light for extremists to target Christians.”
Shea also criticized the Biden administration and Secretary of State Antony Blinken for being “passive” in response to the increasing attacks targeting Christian villages in the north.
“Kidnappings and murders of priests and pastors, enslavement of Christian girls, and mob lynchings for alleged blasphemy against Islam” have intensified since the Biden administration removed Nigeria from the United States’ “Country of Concern” (CPC) list of countries where egregious religious persecution is taking place, Shea said.
“(Blinken) needs to address this crisis, stop making excuses for it based on a climate change narrative and designate Nigeria as a CPC. Anything less is unconscionable,” she said.
“Innocent, defenseless religious people are being slaughtered en masse in an aggressive, onslaught even in areas like today’s attack where peaceful conditions formerly prevailed,” Shea added.
CNA Vatican correspondent Courtney Mares contributed to this story.
At Catholic News Agency, our team is committed to reporting the truth with courage, integrity, and fidelity to our faith. We provide news about the Church and the world, as seen through the teachings of the Catholic Church. When you subscribe to the CNA UPDATE, we’ll send you a daily email with links to the news you need and, occasionally, breaking news.
As part of this free service you may receive occasional offers from us at EWTN News and EWTN. We won’t rent or sell your information, and you can unsubscribe at any time.
Your monthly donation will help our team continue reporting the truth, with fairness, integrity, and fidelity to Jesus Christ and his Church.
At least 50 people are reported to have been killed in the attack at a Catholic church in Owo, Ondo State.
The poignant exchange came during the pope’s meeting with 160 schoolchildren on June 4.
The pope delivered his homily from a wheelchair in front of the main altar of St. Peter’s Basilica.
CNA is a service of EWTN News, Inc.