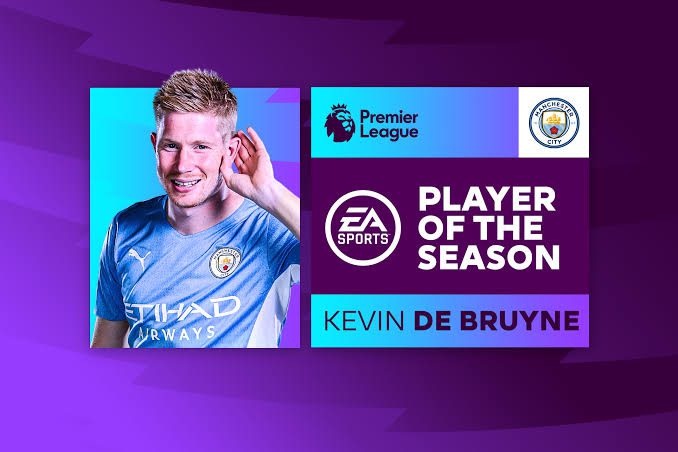 Eight players were nominated for the EA SPORTS Player of the Season award for 2021/22.
You, the fans, had until 18:00 BST on Monday 16 May to vote for your favourite.
The votes of the public were combined with those of the 20 club captains and a panel of football experts to decide the winner.
See: De Bruyne named EA SPORTS Player of the Season
Trent Alexander-Arnold (LIV)
P31 W22 D7 L2​ G2 A12 CS17
The Liverpool right-back has contributed at both ends of the pitch, dominating the right flank for the second-best defence in 2021/22, as well as scoring two goals and setting up 12 more, the second-most of all players.
Jarrod Bowen (WHU)
P35 W15 D8 L12​ G12 A10
The winger is only the second West Ham United player to reach double figures for both goals and assists in a Premier League season, scoring 12 and setting up 10 to emulate Paolo Di Canio. Only two other players have achieved that this term.​
Joao Cancelo (MCI)
P35 W26 D6 L3​ G1 A7 CS19
The versatile full-back has been integral to Manchester City’s title charge. He has played the most minutes of any of their outfield players, completing the most passes in the division and scoring or assisting eight goals.​
Kevin De Bruyne (MCI)
P29 W20 D6 L3​ G15 A7
The 2019/20 winner is aiming to be only the fourth player to win more than one EA SPORTS Player of the Season award. His 15 goals and seven assists have him in the running to emulate legends Nemanja Vidic, Cristiano Ronaldo and Thierry Henry.​
Bukayo Saka (ARS)
P36 W21 D3 L12​ G11 A6
At just 20 years old, Saka has led the charge for an Arsenal team chasing a top-four finish for the first time since 2015/16. He has 11 goals, six assists and has shown great character to bounce back after suffering penalty-shootout heartbreak in last summer’s UEFA European Championship final. ​
Mohamed Salah (LIV)
P34 W24 D8 L2​ G22 A13
The 2017/18 EA SPORTS Player of the Season is in contention again after yet another stunning campaign. The leader in the Golden Boot race has 22 goals and this season became only the sixth player to score 20+ goals in four different Premier League seasons. ​
Son Heung-min (TOT)
P34 W19 D6 L9​ G21 A7
With 21 goals, Son is having his best scoring season in the Premier League. He is only one behind Salah in the Golden Boot race and, impressively, none of his strikes have come from the penalty spot. ​
James Ward-Prowse (SOU)
P34 W8 D12 L14​ G9 A5
The Southampton captain has caught the eye with some magnificent performances in midfield. Four of his nine goals have come from trademark direct free-kicks.
See: How the awards are decided
See: Every Player of the Season winner
Part 2: Barclays Manager of the Season nominees
Part 3: Hublot Young Player of the Season contenders
Forster deal complete External Link
Isaac Hayden joins Norwich City on loan External Link
Relive an incredible 2021/22 season
Season trends: Home wins rise with return of fans
FPL positions: Raya could be next season’s Ramsdale
FPL champion’s tips: Building your opening squad
Premier League club summer 2022 friendly fixtures
Key dates for summer 2022
Dare To Do True – 2022/23 Nike Home Kit unveiled External Link
Premier League club summer 2022 friendly fixtures
Illegal stream organisation jailed for total of 17 years
Man jailed for illegally supplying and viewing PL content
FPL champion’s tips: Look for value early on!
Test your knowledge with our FPL quiz on 2021/22
We’re heading to Germany to face 1. FC Nürnberg External Link
Summer 2022 Transfers & News