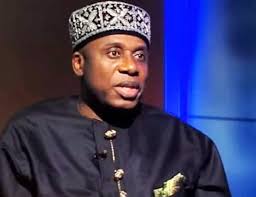 Former Minister of Transportation, Hon. Chibuike Rotimi Amaechi, yesterday, said he worked against all odds to ensure the victory of President Muhammudu Buhari in 2015 and 2019 and that it was time Nigerians reciprocated his gesture by electing him Buhari’s successor.
For context, however, Amaechi said, he stood for Nigeria and Buhari despite discrimination from some southerners to avert what he termed disintegration of the country and civil war.
This is as a special adviser to former Vice-President Atiku Abubakar,  Dr. Umar Ardo, yesterday said President Buhari was morally bound to ensure that a former Lagos State governor, Ahmed Bola Tinubu, became the next president of the country.
Speaking at a consultative meeting with the All Progressives (APC) delegates ahead of the party’s primaries, Amaechi said in spite of intimidations from leaders of the Peoples Democratic Party (PDP) and the height of Boko Haram, he fought not for a Katsina son to become president but for the country’s unity and progress.
He, therefore, contended that it was time for Nigerians to stand for him too and ensure the actualisation of his presidential aspiration.
“They will not allow my flight, because we were strongly to make a Katsina son president, so why will your governor tell you not to vote for me or why will anybody ask you to vote for me?
“As Governor of Rivers State, they seized my plane in Akure. I drove from Akure to Lagos. I got to Lagos at 9pm and somebody will tell you not to vote for me? That person is not being fair.
“They seized my plane in Kano. I drove from Kano to Abuja. I got to Abuja at 2am at the height of Boko Haram all because we were fighting not for a Katsina son but Nigeria.
“We saw Nigeria at a break out of a possible civil war. If I had moved over to PDP, there would have been north vs south and that would have been bad politics.
“So, I stood for Nigeria, it is time for Nigerians to stand for me. We were working at that time to make sure that Nigeria didn’t disintegrate. President Muhammudu Buhari was our candidate to serve Nigeria.”
He, however, added that if given the opportunity to serve as president, he would tackle insecurity and economic challenges besetting the nation as soon as he assumed office.
But Ardo, who is now a chieftain of the Social Democratic Party (SDP) in Adamawa State,said in a statement, that it was because of the political influence of Tinubu that the APC as a political party was registered in the first place.
Ardo explained that it was for the intervention of Tinubu that the merger between Buhari’s party, the Congress of the Progressives Change (CPC) and the Action Congress of Nigeria (ACN)  and other parties was consummated in the first place.
“As the initiator of the merger that ultimately produced the APC, I know the foundational agreement of the merger ab initio between President Muhammad Buhari and Senator Bola Tinubu – i.e. Buhari President and Tinubu Vice President in a merger between CPC and ACN.
“It was Buhari, who after the Supreme Court, dismissed the CPC presidential election petition, approached Tinubu with the idea and offer, and it was upon the latter’s acceptance of both that APC was born.
“Tinubu thus drove the process from March, 2012 to the final emergence of the APC as a registered political party on 31st July, 2013, to establishing the new party structures from Wards, LGAs, States, Zonal and National levels; and, against formidable new opponents that joined the party for their own ends, stood to ensure Buhari’s emergence as APC’s presidential flag bearer.
“Consequently, without Tinubu APC would never have come into being. So, it is only honourable that President Buhari also stands by the foundational agreement and support Tinubu now above anyone else, or APC falls into a deep moral pit that it cannot pull out of forever,” Ardo stated.