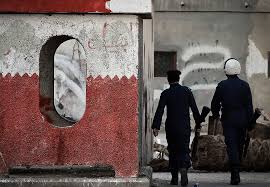 Which language would you like to use this site in?

Albanian Amharic Arabic Armenian Aymara Azerbaijani Belarusian Bengali Bosnian Brazilian Portuguese Bulgarian Burmese Catalan Cebuano Chinese Croatian Czech Danish Dari Dutch English Esperanto Estonian Filipino Finnish French Georgian German Greek Guarani Gujarati Haitian Hausa Hebrew Hindi Hungarian Ido Indonesian Italian Japanese Kazakh Khmer Kinyarwanda Kirghiz Korean Kurdish Kurmanji Latvian Lithuanian Macedonian Malagasy Malay Malayalam Maldivian Mapudungun Maya Moldavian Mongol Nepali Oriya Oromo Pashto Persian Polish Portuguese Punjabi Qeqchi Quechua Rapanui Romanian Romany Rundi Russian Serbian Sinhalese Slovak Slovenian Somali Southern Sotho Spanish Swahili Swati Swedish Tagalog Tajik Tamil Telugu Tetum Thai Tharu Tibetan Tigrinya Tok Pisin Traditional Chinese Turkish Turkmen Ukrainian Urdu Uyghur Uzbek Venda Vietnamese Xhosa Xinca Zulu
Bahraini authorities’ inadequate response to people with tuberculosis in Jaw prison is inconsistent with their human rights obligations and especially the right to health, Amnesty International said today.
Since the end of May, prison authorities disregarded at least two prisoners with symptoms of tuberculosis for over a week without testing them. A third prisoner who was granted hospital care, was returned to the prison two days after a doctor told his family he has tuberculosis.  Prisoners’ families have been sounding the alarm and raising complaints given that no measures have been put in place to protect other prisoners from this contagious airborne disease. In one egregious case, prison authorities failed to move a fourth prisoner with tuberculosis to a hospital until he had been sick for almost a year and was semi-paralysed.
“Bahrain’s inadequate response to address cases of tuberculosis in prison shows a disturbing lack of concern for prisoners’ health, and puts their right to health at grave risk. The prison authorities have stood by for too long in the face of the risk of further infections,” said Amna Guellali, Amnesty International’s Deputy Director for the Middle East and North Africa.
“The Bahraini authorities must immediately provide people in prison who are sick with all necessary medical care. They should put in place measures to prevent the spread of the illness, including access to voluntary testing for tuberculosis for people with symptoms. Authorities should further investigate any allegations of delayed access to health care and hold those responsible to account.”
Inadequate precautions taken to prevent the spread of tuberculosis
One prisoner, Ahmed Jaber, was confirmed to have tuberculosis by medical examinations at Salmaniya hospital after being left sick for 11 months in prison. In a video posted on social media by an exiled activist on 4 June, Ahmed described how he fell sick in April 2021 and was unable to walk or dress by December 2021.
Despite thi, prison authorities did not transfer Ahmed Jaber to hospital until he was semi-paralysed and bedridden in March 2022. He is currently in a halo vest – a medical device that holds the head and neck in place to prevent further damage to the spine – after severe deterioration of his neck vertebrae due in part to advanced tuberculosis.
Another prisoner, Hasan Abdulla Bati, who also suffers from sickle cell anaemia, was diagnosed with tuberculosis last month. He had been ill with swollen lymph nodes since 2019, and doctors had recommended he undergo an operation, but the prison administration refused to schedule it. On 30 May 2022, after transfer to Salmaniya hospital due to a severe episode caused by his sickle-cell anaemia, doctors informed his family that he had tuberculosis; yet two days later, Bahraini authorities returned him to the prison, placing him back in the same cell with eight other people. He continues to be transported by bus with other prisoners for family visitations inside the prison. Hasan Bati has described his illness and the prison administration’s delay in providing treatment in a voice recording given to Bahraini human rights defender Sayed Ahmed al-Wadaei that he posted on social media.
Sayed Nizar al-Wadaei, who was held in the same cell with Ahmed Jaber, has been sick with tuberculosis-like symptoms since the end of May 2022. When he complained to prison guards about his illness, they put him in solitary confinement as punishment, without time outside of the cell or contact with other prisoners. He received testing on 6 June 2022 only after his family had submitted multiple complaints to Bahraini authorities. As of this writing, authorities have not told Sayed Nizar or his family the results of the test or given him any further treatment.
Amnesty International has determined that prison officials moved Ahmed Jaber between cells holding tens of other prisoners in at least seven different buildings at Jaw prison while he was ill there. With the addition of Hasan Bati, who is held in a different building, this means that at least eight buildings at Jaw have had exposure to a person with tuberculosis.
Under international human rights law, the state has a responsibility to ensure that prisoners have access to the same standard of healthcare as is available in the community, free of charge, which includes transferring prisoners to specialized or civil hospitals for treatment that is unavailable in prison.
Background
Amnesty International has documented a recurring problem of medical neglect at the overcrowded and unhygienic Jaw prison in Bahrain. In 2021, there was a major Covid-19 outbreak. One prisoner died after prison authorities waited until he was suffering from severe breathing difficulties before transferring him to hospital.
If you are talented and passionate about human rights then Amnesty International wants to hear from you.