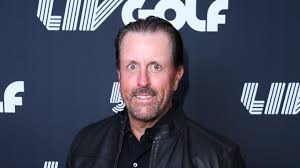 LIV Golf is here and Phil Mickelson is the face of the new Saudi-backed tour. Not because he’s the best player, but because my man’s eyes were buggin’ for most of the promotional events over the last 24 hours. He looks like a character from a John Wick movie who has just been told that John Wick has arrived at his home in the middle of a dinner party where the leather jackets are not optional. He’s a divorced dad picking his son up on Sunday night and realizing that the last day of school was last Friday. He looks like he’s seen some things and by the time this is all over, it’s likely he will have. Of course, he’ll also see a ton of cash.
Phil is asked if he’s really getting $200 million to play LIV GOLF. He smiles. “I feel like contract agreements should be private. But it doesn’t seemed to be that way.”
Obviously, Mickelson, along with the other golfers, are conflicted. On the one hand they are all against human rights violations and horrifying acts of murder. On the other hand, they are being paid a lot of money. So, as Graham McDowell puts it, “if Saudi Arabia wants to use the game of golf as a way for them to get to where they want to be, and they have the resources to accelerate that experience, you know, I think we’re proud to help them on that journey.”
🗣️ “This has been incredibly polarising, we all agree up here that the Jamal Khashoggi situation was reprehensible”

Graeme McDowell and other golfers joining the LIV Tour have faced questions about Saudi Arabia’s human rights record and sportswashing pic.twitter.com/CpX1ycresb
What more can be said? Let’s go to the guy who criticized the PGA for “obnoxious greed.”
Reporters have asked about other potential sportswashing events which the LIV golfers have deftly avoided.
#Golf‘s moral maze…

“If Vladimir Putin had a tournament would you play there?”@IanJamesPoulter – “I won’t comment on speculation”

“Would you have played in Apartheid South Africa?”@WestwoodLee – “I can’t answer a hypothetical question”@NeilMcLeman with the questions pic.twitter.com/HGCNoj3HFu
And really, what other reaction can you have besides Phil’s?
There’s just something unnatural about golfers without hats. No wonder those guys are seem so uncomfortable.
© 2022 Minute Media – All Rights Reserved