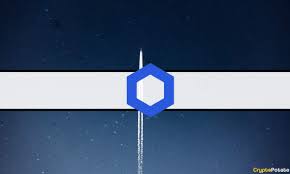 The Chainlink native token is one of today’s best-performing crypto assets following the latest long-term staking roadmap release.
On June 7, the Chainlink team published its “Long-Term Goals, Roadmap, and Initial Implementation,” outlining the following stages for the data oracle blockchain project.
The blog post referenced “Chainlink Economics 2.0” with a focus on staking as part of the endeavor to scale the system and integrate more blockchain networks.
Staking is a mechanism that brings a new layer of ‘cryptoeconomic security’ to Chainlink, it explained. The same is true for most proof-of-stake blockchains that reward stakers for helping to secure the network.
Staking marks the start of #Chainlink Economics 2.0, a new era for the long-term security and sustainability of oracle networks.
In this update, we define the long-term goals, roadmap, and initial implementation of staking in the Chainlink Network.https://t.co/WJkoUzPA0i
— Chainlink (@chainlink) June 7, 2022

There are four long-term goals for Chainlink, which launched oracles on Solana earlier this month, staking but the underlying principle was explained as follows:
“The staking of LINK in turn enhances the ability for nodes to receive jobs and earn corresponding fees within the Chainlink Network.”
The primary goal of staking is to increase the security and user assurances of Chainlink oracle services. LINK tokens are locked up as a “service-level guarantee around network performance,” it explained. Furthermore, incentives and penalties such as slashing enable Chainlink nodes to consistently generate accurate oracle reports and deliver them in a timely manner.
The second goal is to encourage community participation and involvement. Additionally, node operators can create delegated staking systems, similar to what Tezos does.
Thirdly, Chainlink staking aims to generate sustainable rewards from actual long-term use. It expects long-term growth to result in a greater portion of staking rewards being sourced from “non-emissions-based sources.”
The final goal is to “empower node operators to access higher-value jobs by staking.” This means that over time, node operators will have greater opportunities to participate in Decentralized Oracle Networks (DONs), furthering the security even more.
The rollout of the staking mechanism will be gradual, evolving as its oracle feeds did from a single feed on ETH/USD to thousands of them. The initial v0.1 release is projected for later this year, with planned upgrades to v1 and v2 ushering in additional functionality.
In February, Bank of America gave Chainlink a big plug stating that its oracles could disrupt major industries.
Chainlink’s native token reacted strongly to the roadmap update with a surge of 18% on the day before retracing slightly. From around $7.40 this time yesterday, LINK pumped to an intraday high of $8.83 during the Wednesday morning Asian trading session.
The token was trading at $8.40 at the time of writing, having gained more than 10% over the past fortnight. However, the longer-term trend is still bearish, as LINK is down 84% from its May 2021 all-time high of $52.70.
Martin has been writing on cybersecurity and infotech for over two decades. He has previous trading experience and has been covering developments in the blockchain and cryptocurrency industry since 2017. Contact Martin: LinkedIn