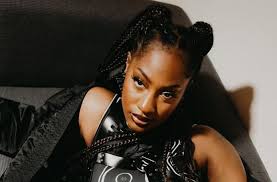 Temilade Openiyi popularly known as Tems
The famous Nigerian singer Temilade Openiyi popularly known as Tems, has been diagnosed with Reflux Laryngitis.
The music star disclosed this on her official Instagram page on Tuesday.
“It breaks my heart to say this, but there has been no other option for me. I’m not feeling too good at the moment. After my last performance, I was diagnosed with Reflux Laryngitis, and I have to take some time off to protect what’s left of my voice,” she wrote.
“On doctor’s order, I have to postpone the two shows this week. The new dates for both shows will be announced tomorrow.”
The singer apologised for the inconveniences the postponement may have caused.

A post shared by TEMS (@temsbaby)
The Department of Otolaryngology, University of Pittsburgh, describes Reflux laryngitis as a voice disorder that results from irritation and swelling of the vocal folds due to the backflow of stomach fluids into the throat.
This backflow, the department said, is called laryngopharyngeal reflux (acid that reaches the level of the throat).
Patients with reflux laryngitis have complaints similar to other voice disorders, making it an easily missed voice disorder.
Tems’ disclosure comes days after Canadian-based singer Justin Bieber revealed he has partial face paralysis and would be taking a break from music
The 28-years-old singer told his fans in a video on his Instagram that he’s been diagnosed with Ramsay Hunt Syndrome, which is causing him partial facial paralysis.
After gaining international recognition and a Grammy nomination for “Essence”, Tems has been featured on the albums of global superstars like Drake and Future.
After receiving her second platinum plaque in May, Tems joined Wizkid as the only other Nigerian artiste with two U.S. platinum plaques.
The 26-year-old Lagos State-born songstress earned her double platinum after American rapper Future took to Twitter to clarify the Nigerian artist’s credit on the album.
Future featured Tems and Drake on the track released on May 3. It is the second single from Future’s ninth studio album, ‘II Never Liked You’.
In the United States, platinum certification means that an album has sold one million copies or that a single has sold two million copies.
Tems received her first Platinum plaque in October 2021 when ‘Essence’ crossed the one million sales Jayne Augoye is an assistant editor and covers the entertainment and lifestyle beat for PREMIUM TIMES. She has a master’s degree in Media and Communication from the Pan Atlantic University. Twitter: