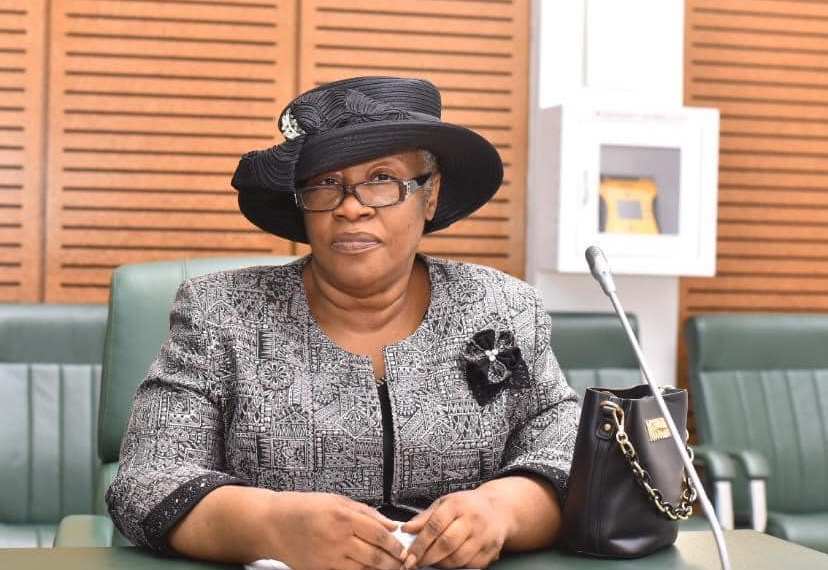 Justice Ekaete Obot
A judge in a State High Court, Uyo, on Wednesday, repeatedly threatened to send a defence counsel, Inibehe Effiong, to prison in a suit in which Governor Udom Emmanuel of Akwa Ibom State is a party.
Ekaete Obot, who is the state’s chief judge, lashed out at the counsel, Mr Effiong, who pleaded with the court to entertain his application which seeks the judge’s withdrawal from the case after his client, Leo Ekpenyong, accused her of bias.
“I will send you out of there now, remove that robe and send you to prison by the time you go to the Court of Appeal and come back. What is this? You are overstepping your bounds,” Justice Obot lashed out at Mr Effiong.
The court session was entirely dramatic.
Justice Obot first ordered the police to temporarily confiscate mobile phones from observers inside the court to prevent any recording of the proceedings.
The claimant counsel, Samuel Ikpo, in the middle of the court session, accused the defence counsel, Mr Effiong, of recording the court proceedings with his laptop, a development which prompted Mr Effiong to turn his laptop monitor to Mr Ikpo to look at, as a proof that he was not recording.
Governor Emmanuel sued Mr Ekpenyong, a lawyer, for defamation of character over the publication in which he accused the governor of “buying judgment” from the 2019 National Assembly Election Tribunal, an accusation the lawyer denied.
The court had ordered Mr Ekpenyong to pay the governor N1.5 billion as general damages for libel.
In another defamation suit between a former senator, Effiong Bob, and Mr Ekpenyong, which is before the same judge, the court had ordered Mr Ekpenyong to pay N150 million as damages to Mr Bob.
Both judgments were given simultaneously on December 15, 2020, by Justice Obot.
The defendant’s counsel, Mr Effiong, on November 25, 2021, challenged the court that it breached the Nigerian Constitution in its judgments against his client.
Justice Obot scolded Mr Effiong for asking the court to set aside the two judgments and grant his application for extension of time for his client to defend himself.
The case attracted public attention last year when the judge lashed out at Mr Effiong.
“You’re not on Channels TV, don’t stand before me and talk nonsense,” she had said.
The court, however, set aside both judgments on February 16, 2022, and granted the application for extension of time as requested by Mr Effiong.
Dissatisfied with her handling of the matter, the defendant filed an application on June 23, 2022, asking the judge to recuse herself.
“The judge had already delivered judgment, even though in default, against Mr Ekpenyong where she asked him to pay Governor Emmanuel N1.5 billion,” Mr Effiong told reporters after the court

“We are saying because you have already found the defendant guilty in this matter, it is only fair that the matter be reassigned to another judge in line with legal practice.”
The defendant said the judge attended the wedding of Mr Bob’s daughter even when Mr Bob is a litigant in her court.
Mr Effiong told reporters it was against the code of conduct for judicial officers for the chief judge to have attended such an event which was not a state function, adding that Mr Bob was present in her court for the penultimate hearing of the case.
The claimant’s counsel, Mr Ikpo, declined comment on the case.
Ms Obot continued to preside over the case despite Mr Ekpenyong’s objection.
Richard Peters, who is a priest with the African Church and a media aide to Governor Emmanuel, appeared as the governor’s witness in the case.
He told the court that Mr Effiong was intimidating him, when the lawyer asked if his name – Peters – ends with ‘r’ or ‘s’.
Mr Peters told the court how he had a chat with the defendant on Facebook Messenger after the defendant made the alleged publications against the governor. He said the defendant told him he would publish more things against the governor.
Mr Effiong asked the witness to spell his name before the court because the name used in the said Facebook chat is Peter, without the ‘s’.
The witness told the court that the defendant, Mr Ekpenyong, used a verified Facebook account to chat with him, a claim Mr Effiong challenged with the argument that verified Facebook accounts usually have a blue tick.
But the witness responded that it is possible to have a verified Facebook account without the blue tick.

Mr Effiong objected to an electronic printout of the chats which the witness, Mr Peters, claimed he had with the defendant. The lawyer argued that it did not conform to Section 84 of the Evidence Act which requires that any electronically generated document to be tendered as evidence must be supported with a certificate of authentication.

The witness did not tender a certificate to authenticate the chat he claimed he had on Facebook Messenger with the defendant.
Mr Ikpo, the claimant counsel, prayed the court to discountenance the objection of the defence counsel and admit the document as evidence. He said the “objection was unfounded.”
Justice Obot overruled Mr Effiong and admitted the document as evidence. She said the document conformed to the law.
Mr Effiong drew the court’s attention to the fact that only one document (the printout of the said Facebook chat) was tendered but that the court went beyond admitting it, to declaring that three exhibits – the printout of the chat, printout of a Facebook page, and a certificate of authentication – had been admitted.
“You do not have any understanding of what a deposition is. By your submission before me it shows your ignorance of what a deposition means,” the judge told Mr Effiong.
“It appears the ruling of the court is different from the proceedings. This is why we are saying let our motion on recusal be entertained,” Mr Effiong responded.
“Please shut up! Who do you think you’re talking to? She lashed out again at Mr Effiong.
“You demonstrate as if anything is happening so they (journalists) will see your demonstrations and they will go and write nonsense in the press.
“I don’t care. I don’t care about all the shit. Now you face your work and do it decently,” the judge said, and added that Mr Effiong was free to take the matter to the Court of Appeal.
“Even (Nigeria Judiciary Commission) NJC, go. I’m waiting for you there.”
The drama continued as Mr Effiong contested the adjourned dates of 27/29 July.
He showed the judge his diary, and told her the dates were not convenient for him, but his protest did not deter the judge.