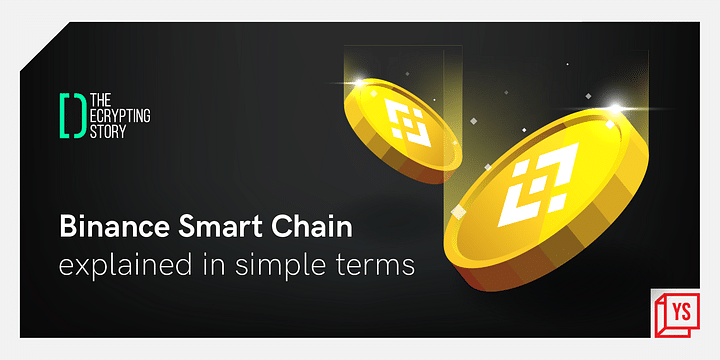 Ethereum, which allows financial transactions as well as experiments with code and the development of decentralised applications (DApps), has remained the most popular smart contract-enabled blockchain.
However, it has historically suffered from slow transaction speeds and high gas fees (transaction fees) due to network congestion.
In April 2020, Binance Smart Chain (BSC) was introduced by the crypto exchange Binance to enable DApp development with larger capacity, faster speeds, and lower latency compared to Ethereum.
BSC also looked to leverage the high transaction capabilities of the existing Binance Chain (BC), which was originally made to facilitate decentralised crypto trading. As BC was optimised for quick trading, it wasn’t flexible from a programming standpoint, hence the need for BSC.
BSC is an independent blockchain that runs in parallel to BC, and the two are cross-chain compatible.
Changpeng Zhao, CEO, Binance. Image credits: Binance
Ethereum currently uses Proof of Work (PoW) consensus, which is time-consuming and energy inefficient (it is in the process of moving to Proof of Stake [PoS], which is far more efficient).
BSC has used Proof of Stake, or rather a slightly modified version known as Proof of Staked Authority (PoSA), from the get go.
Binance Coin (BNB) is the native token of BC, originally launched as an Ethereum Request for Comment – 20 (ERC-20) token. On BSC, participants can stake BNB (which is now a Binance Smart Chain Evolution Proposal 2 [BEP-2] token) to become validators.
Upon validating and proposing confirmed blocks (representing transactions), validators receive transaction fees.
From the initial maximum supply of 200 million, burns will continue until BNB supply reaches 100 million, as per Binance.
With its PoS features, BSC is able to achieve three-second block times for confirming transactions, while Ethereum takes anywhere up to 14 seconds. Although Ethereum 2.0 (a set of network upgrades towards PoS) will change the game for Ethereum, BSC currently remains faster and cheaper than Ethereum.
Get stories of change makers and innovators from the startup ecosystem in your inbox
Please fill in this field.

Ethereum currently has close to 3,000 DApps running on it, while BSC hosted around 800 DApps as of October 2021. Some of the leading DApps on BSC are PancakeSwap (DeFi), Bomb Crypto (gaming), and SecondLive (gaming).
Despite its advantages, BSC is not considered as decentralised as Ethereum and many of its other counterparts since it has only 21 validators (Ethereum had over 200,000 back in August 2021).
On BSC, these 21 validators are reportedly determined on a daily basis, based on staked BNB and delegations. This daily active validator set is by Binance Chain, which in turn is managed by only 11 validators.
Further, on Ethereum’s old PoW system, anyone meeting the technical requirements can become a participant and help run the network.
Going forward, the race for becoming the go-to platform for DApp development at scale will heat up as BSC and Ethereum look to attract more developers to their platforms.
In October 2021, Binance initiated a $1 billion growth fund to accelerate adoption in BSC, while Ethereum 2.0 upgrades are under way. The blockchain has been preparing developers for the upcoming ‘Merge’ where Ethereum will transform from a Proof-of-Work (Pow) blockchain to a Proof-of-Stake (PoS) network.
Other smart contract-enabled blockchains like Solana (SOL), Polkadot (DOT), Avalanche (AVAX), Algorand (ALGO), Cardano (ADA), etc have also been vying to become prominent smart contract platforms.