The attack on President Muhammadu Buhari’s advance team of security details by bandits dominated the front page of Nigerian dailies.
The Punch reports that Doyin Okupe, the “placeholder” for Labour Party’s vice-presidential slot, has declared the negotiation between his party and the New Nigeria Peoples Party for the 2023 general election as “dead”. The newspaper says Nigeria’s COVID cases jumped by 67 percent in two weeks. 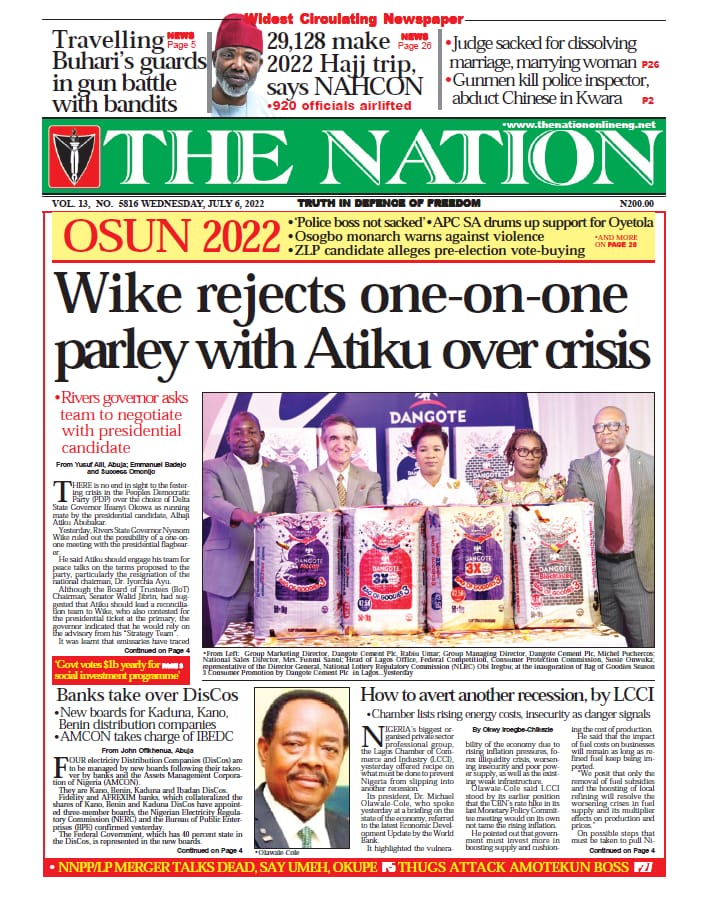 The Nation reports that the National Hajj Commission of Nigeria (NAHCON) says at least 29,139 Nigerians made the 2022 Hajj pilgrimage to Mecca. The newspaper says gunmen killed a police inspector and kidnapped a Chinese in Kwara.
The Guardian reports that telecommunication operators in Nigeria risk N250,000 fine over any abandoned tower, according to a new guideline from the Nigerian Communications Commission (NCC). The newspaper says the Nigeria Sovereign Investment Authority (NSIA) has entered into a $50 million agreement with Vitol to establish a joint venture in carbon avoidance and removal projects.
Daily Trust reports that 69 clinics have shut down in Kastina as bandits convert healthcare facilities to personal use. The newspaper also reports that the Independent National Electoral Commission (INEC) says it is working with the Economic and Financial Crimes Commission (EFCC) to curb vote buying ahead of the 2023 elections.
Daily Independent reports that Nyesom Wike, governor of Rivers, and his supporters have agreed to work with Atiku Abubakar, presidential standard bearer of the Peoples Democratic Party (PDP), for the 2023 elections. The newspaper says the federal government has appealed to states over ranching as the solution to farmer-herder clashes.
There are no comments at the moment, do you want to add one?