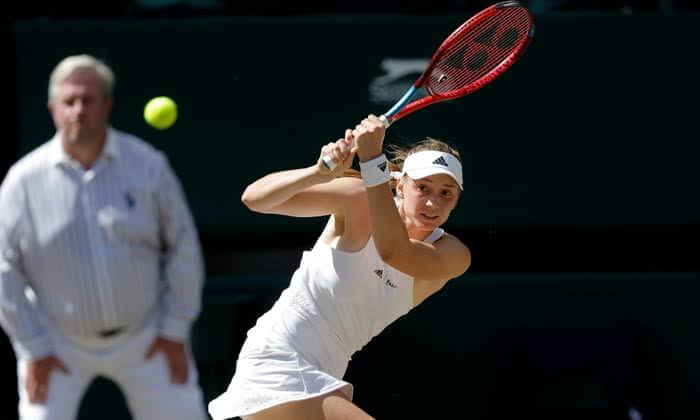 Russian-born champion was able to compete at Wimbledon thanks to her switch of national allegiance in 2018
It took one hour, 48 minutes for history to be made at Wimbledon yesterday on Saturday as Elena Rybakina became the first player from Kazakhstan to win a grand slam singles title. Nervous initially, her 3-6, 6-2, 6-2 victory over Ons Jabeur means her name will be forever associated with Wimbledon.
Rybakina went into the final as the underdog and many people expected it to be Jabeur to be the history-maker. The first Arab player to make a grand slam singles final and the first African to reach a singles final in the Open era, Jabeur led by a set but could not maintain her level in the face of a barrage of pure hitting and outstanding resilience from the 23-year-old, who is the youngest winner of the title since Petra Kvitova in 2011.
At the end, when she offered no celebration and just puffed out her cheeks instead, the enormity of her achievements hardly seemed to register. Never one to celebrate a match win, it was only a few minutes later when she walked up into the stands to greet her team that she allowed herself to smile.
Born in Moscow to Russian parents, Rybakina switched allegiance to Kazakhstan in 2018. She has played Fed Cup for them and represented her country at the Olympics. When she eventually gets back to Kazakhstan, if she was not already famous, with the Wimbledon trophy in her bag, she undoubtedly will be now.
“For sure,” her coach, Stefano Vukov, said. “Hopefully not only in Kazakhstan but all over the world. I mean she showed what she can do. And hopefully all around the world people are going to start recognising her.”
Any worries from the All England Club that Rybakina may be booed thanks to her Russian roots – after it banned Russian and Belarusian players from this year’s event – were soon forgotten as the world No 23 crunched winners into all corners, with the crowd responding warmly. Vukov said Russia’s invasion of Ukraine affected everyone but that Rybakina had not felt any extra pressure as a result of being asked about throughout the tournament.
“We knew [the subject would come up],” he said. “You can’t avoid these things. It’s a big issue at the moment in the world right now. Everybody wants peace. Everybody wants everything to stop, especially her and tennis players, because it’s also difficult for them to live and to travel.
“This is the least of the problems – obviously, there are bigger problems. But we were expecting all of this. It’s normal.
“We had same issues when she switched to the Kazakhstani nationality. The Russians absolutely were questioning why. If you flip it around, it is the same story, just in a different way. So she’s been through it already and she’s always had these kind of questions coming her way. She is just speaking the truth, there is nothing to hide, you know? She’s been doing well.”
The former world No 1 Kim Clijsters, who has been playing in the invitational event here and working as a commentator for BBC, said she expected there to be a boom in tennis in Kazakhstan as a result of Rybakina’s triumph.
“I remember that the [club] memberships and kids signing up for the sport of tennis, which definitely wasn’t at the top of people’s list [of things] for kids to do, that just skyrocketed when Justine [Henin, another former world No 1] and I started to do well,” she said. “That had a huge impact.”
For Kazakhstan, a country with little tennis heritage, it will be even bigger, Clijsters said. “This will be the news and it will be incredible.”
Vukov agreed, saying he expected young children to want to pick up a racket as a result of Rybakina’s win. “We have unbelievable facilities, many international tournaments now,” he said.
“It’s becoming a bigger and bigger, especially with these results, with Elena winning a grand slam, history made. Definitely this sport will be pushed more.
“There’s going to be more financial help for the kids. Kids will be inspired to play. They’re coming up fast. It’s great what they’re doing. It’s been really very smart.”
Rybakina may not have celebrated as Jabeur’s final backhand return sailed wide but she is now a grand slam champion. And though the absence of ranking points means she won’t get the reward in terms of moving up the rankings, there is no need to rush.
“We were joking around, always saying, points come and go, grand slams stay forever,” Vukov said. “So, you know, it’s just a matter of time. The level is there.”
The level, and the fact she is a Wimbledon champion.