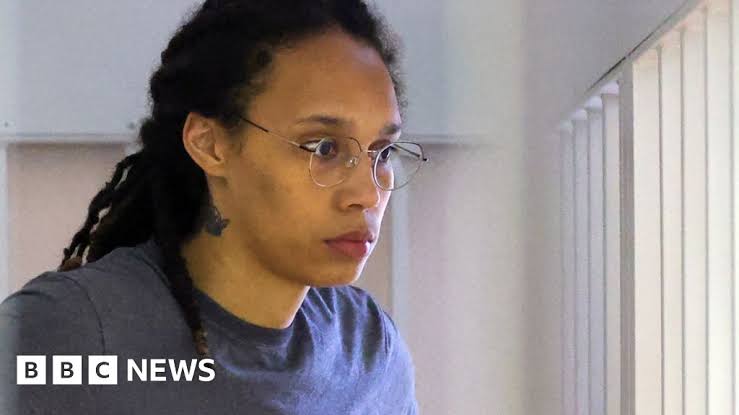 A Russian court has sentenced US basketball star Brittney Griner to nine years in prison on drug charges.
As Griner, 31, was being led out of the courtroom in handcuffs, she was heard saying: “I love my family.”
The double Olympic winner has admitted possessing cannabis oil, but told the court she had made an “honest mistake”.
The court near Moscow convicted her of smuggling and possessing narcotics. The prosecution had sought a nine-and-a-half year jail term.
Reading the verdict on Thursday, the presiding judge said she had taken into account the fact that the American had already spent a considerable time in detention.
Griner’s defence lawyer Maria Blagovolina said her client was “very upset, very stressed”.
“She can hardly talk. It’s a difficult time for her. When we saw Brittney on Tuesday, we told her, ‘See you on Thursday’. She said, ‘See you on doomsday’. So it looks like she was right.”
The defence team said they would appeal against the verdict.
Griner, who is considered one of the best players in the world, was detained in February at an airport near Moscow when vape cartridges containing cannabis oil were found in her luggage.
She had come to Russia to play club basketball during the US off-season.
Soon after, Russia invaded Ukraine and her case has become subject to high-profile diplomacy between the US and Russia.
US President Joe Biden called the sentencing “unacceptable”.
US Secretary of State Antony Blinken said: “Russia, and any country engaging in wrongful detention, represents a threat to the safety of everyone travelling, working, and living abroad.”
It is unclear how long she will actually spend behind bars, as the US and Russia have been discussing a potential prisoner swap that could involve the basketball player.
Reports in US media suggest imprisoned Russian arms trafficker Viktor Bout – known as the Merchant of Death – could be transferred by Washington to the Russian authorities as part of the deal.
Speaking after her sentencing, White House national security spokesman John Kirby urged Russia to accept the “serious proposal” offered by the US for Griner and fellow detained US citizen Paul Whelan.
“It’s a serious proposal. We urge them to accept it. They should have accepted it weeks ago when we first made it,” Mr Kirby said.
After the court heard closing arguments, Griner said: “I made an honest mistake, and I hope in your ruling it does not end my life.”
“I did not conspire or plan to commit this crime,” she added.
Griner also said she had received neither an explanation of her rights nor access to a lawyer in the initial hours of her detention, and that she had to use a translation app on her phone to communicate.
Griner case throws spotlight on hostage diplomacy
US could swap Russia arms dealer for Griner
Brittney Griner pleads guilty to Russian drugs charge
Somali forces claim end to deadly hotel siege
Finnish PM reveals she has taken drug test
Ex-Briton ‘Isis Beatle’ sentenced to life in prison
Greece promotes smaller islands over Mykonos and Corfu
The new sound of dance music sweeping the world. VideoThe new sound of dance music sweeping the world
‘Everything we get is through selling cannabis’
‘I broke the world record with my last ever run’ Video‘I broke the world record with my last ever run’
Why one of the world’s greatest composers was erased from history
Peace at a price in the Taliban’s heartlands
Waiting 38 years for a soldier lost on an icy battlefield
How much grain is being shipped from Ukraine?
Remembering the painful journey from Pakistan to India. VideoRemembering the painful journey from Pakistan to India
Turkey’s massive subterranean city
The language with no known origin
Why overthinkers struggle with remote work
© 2022 BBC. The BBC is not responsible for the content of external sites. Read about our approach to external linking.