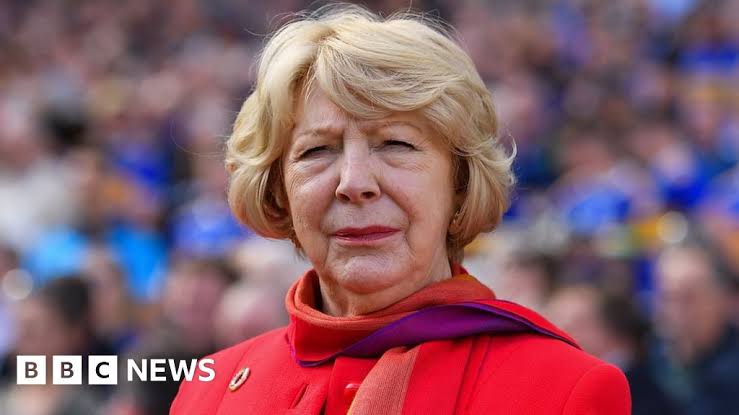 The Irish president’s wife, Sabina Higgins, has defended a letter she wrote to a newspaper about the war in Ukraine after criticism of her views.
She wrote to The Irish Times last week to protest that a previous editorial had not encouraged any ceasefire talks.
But her personal letter, which briefly appeared on the president’s official website, was criticised for failing to register that Russia was the aggressor.
She has now pointed out that she has condemned the invasion from the start.
In a statement issued on Tuesday afternoon, Mrs Higgins explained that her letter to the Irish Times had made “a plea for peace” in Ukraine and she questioned why anyone would find that unacceptable.
Much of the controversy centred on where her letter was published, specifically how it subsequently ended up on her husband’s official website.
It led to President Michael D Higgins facing questions from politicians and diplomats about whether he shared his wife’s opinion on the war in Ukraine.
Mrs Higgins’ letter was later removed from the presidential website.
In her latest statement, the president’s wife said: “I have from its outset strongly condemned the illegal Russian invasion of Ukraine and I cannot be but dismayed that people would find anything unacceptable in a plea for peace and negotiations when the future of humanity is threatened by war, global warming and famine.”
She also explained that she had written her letter to the newspaper “in a personal capacity” but was later contacted by a number of people who had missed the publication and told her they could not access the contents online.
“I therefore put it on my dedicated section of the website as I have done for the last number of years,” Mrs Higgins said.
“Having put my letter up, I subsequently took it down when I saw it being presented as not being from myself, but from the general President.ie website.”
The contents of her correspondence to the Irish Times said she was “disappointed” and “dismayed” that an earlier editorial did not encourage any ceasefire negotiations that might lead to a positive outcome.
Mrs Higgins added the war would continue until there was a ceasefire and negotiations.
Her intervention led to a lot of public criticism, not just from Ukrainians in Ireland but also from a Ukrainian MP, who said it was “painful” and “uninformed”.
It is rare for politicians in the Republic of Ireland to criticise the head of state, but over the weekend a number of government representatives called on President Higgins to address the issue and explain whether he supported his wife’s position.
While he was attending the funeral of David Trimble, Northern Ireland’s former first minister, on Monday, the president’s officials issued a statement which said he had repeatedly condemned the Russian invasion as illegal, immoral and unjustifiable.
It also said that he had repeatedly called for the immediate withdrawal of Russian troops and an end to the violence while stressing the importance of using every available means of diplomacy.
But the president’s statement did not refer to his wife’s letter, or to why it briefly appeared on the official Áras an Úachtaráin website, which prompted further calls for the president to clarify the publication.
The role of the directly-elected Irish president is largely ceremonial and he or she is not supposed to comment on political issues.
However, President Higgins has previously criticised government policy on issues such as housing policy and the plight of refugees.
Daughter of Putin ally killed in Moscow blast
Singapore to end ban on gay sex
Somalia hotel siege ends leaving more than 20 dead
Demi Lovato is back, and this time she’s angry
Greece promotes smaller islands but locals are unconvinced
Missing girl found after nine years describes ordeal
The new sound of dance music sweeping the world. VideoThe new sound of dance music sweeping the world
‘Everything we get is through selling cannabis’
‘I broke the world record with my last ever run’ Video‘I broke the world record with my last ever run’
Why one of the world’s greatest composers was erased from history
Peace at a price in the Taliban’s heartlands
How much grain is being shipped from Ukraine?
Turkey’s massive subterranean city
The language with no known origin
Why overthinkers struggle with remote work
© 2022 BBC. The BBC is not responsible for the content of external sites. Read about our approach to external linking.