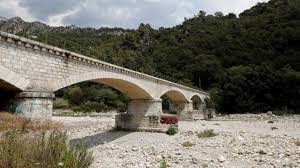 The French government has set up a crisis team to tackle a historic drought that has left more than 100 municipalities short of drinking water.
Trucks are taking water to those areas, as “there is nothing left in the pipes”, Minister for Ecological Transition Christophe Béchu said.
The prime minister’s office said it was France’s worst recorded drought. Water use is being restricted in 93 regions.
Dry conditions are expected to continue for at least the next two weeks.
The state energy company EDF has had to reduce output at some nuclear power plants, as river temperatures are too high to provide sufficient cooling, AFP news agency reports.
There are fears that the drought – hitting nearly all of mainland France – will reduce crop yields, exacerbating the food crisis caused by the war in Ukraine.
Europeans are already struggling with higher food prices as grain exports from Russia and Ukraine – among the world’s top producers – are much lower than normal.
The heatwave that has baked France since June has prompted trees and bushes to shed their leaves early, creating scenes that look autumnal.
In July France had just 9.7mm (0.38 inches) of rain, making it the driest month since March 1961, the national weather service Meteo-France said.
Irrigation has been banned in much of the north-west and south-east of France to conserve water.
The corn harvest, used mainly for animal feed, is expected to be 18.5% lower this year compared with 2021, the agriculture ministry said. The main corn-growing areas are Alsace in the east and western regions, and the harvest is already under way.
Corn exports from France, Hungary, Romania and Bulgaria are all expected to be lower this year because of the heatwave, and those lower volumes will push prices up, French BFMTV reported.
Livestock farmers in the Alps are having to descend into the valleys by truck every day to collect water for their animals, which adds several hundred euros to their weekly fuel bills, Broadcaster TF1 reported.
How have you been affected by the drought? Share your experiences haveyoursay@bbc.co.uk.
Please include a contact number if you are willing to speak to a BBC journalist. You can also get in touch in the following ways:
If you are reading this page and can’t see the form you will need to visit the mobile version of the BBC website to submit your question or comment or you can email us at HaveYourSay@bbc.co.uk. Please include your name, age and location with any submission.
In pictures: England’s bare lawns and parched parks
40C heatwave has to be climate change – scientists
Warnings of ‘heat apocalypse’ in parts of France
Trump sues justice department over Mar-a-Lago search
UK agencies accused of tip-off that led to torture
Three US police suspended over beating video
Russia appeals for new recruits for war effort
Wargaming a North Korean attack
Inside the secret world of trading nudes
‘Only the coffin trade is booming’
Strike at key UK port to cost ‘stack of money’
Can a sleepy Japanese town become Asia’s Silicon Valley?
‘I want Wrexham to be the first club in space’ Video‘I want Wrexham to be the first club in space’
What is ‘dopamine fasting’ and is it good for you?
Demi Lovato is back, and this time she’s angry
Turkey’s massive subterranean city
The language with no known origin
Why overthinkers struggle with remote work
© 2022 BBC. The BBC is not responsible for the content of external sites. Read about our approach to external linking.